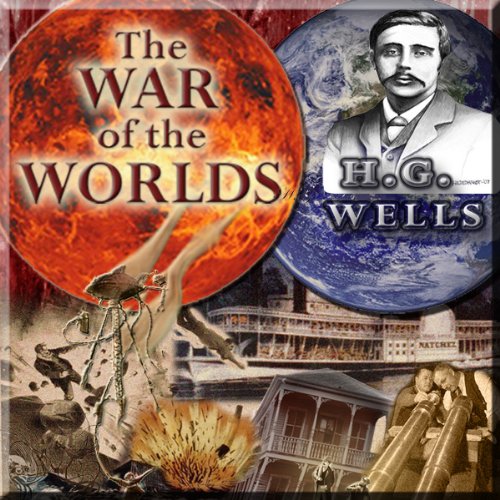 War of the Worlds (Dramatized)

This version of The War of The Worlds is a clever adaptation of H. G. Wells' novel by Sidney Williams. This is the first dramatized audio of the novel set in the period and place Wells intended. This old-time radio-style drama is hosted by Tom Mitchell and was recorded in the U.K. with a full cast, including Martyn Tott, Nell Brooker, Simon Watts, John Tott, and Patricia Tott. Music and sound effects were all skillfully edited by Steve Digre.

This new retelling of War of the Worlds features wonderful music, including "The General", written and performed by Yiannis Kranidiotis, and "Mars the Bringer of War", written by Gustav Holst, recorded by Eric Pancer, and performed by The Bensenville/Wood Dale Concert Band, conducted by Fred Lewis.

It was produced by Troy Thayne of Thayne Multimedia for the Blind and Disabled, Inc.

What listeners say about War of the Worlds (Dramatized)

Seeing Our Way Back into Radio Theater

By: PATRICIA HILDEBRANDT
Utah radio theater producer Troy Thayne and co- producer Clyde Hettrick have created a new audio version of H.G. Wells' classic science fiction story "War of the Worlds"
Thayne’s first show, “War of the Worlds,” is produced “by the blind, for the blind.” Since most “War of the Worlds” movies were set in the U.S. , Thayne wanted his to be a more authentic telling of H.G. Wells’ story. Scriptwriter Sidney Williams, whose father was blind late in life, set the story in England , and the actors actually live in the area where the story is set. The story is true to the book, and Thayne manages to keep the “old time radio feel” to the production.

Not as good as expected

First of all this is a piecemeal dramatization.
I was expecting a quality similar to Leonard's adaptation.
This is wooden, the ambience is wrong and the accent is horrible at times.
Regret buying this.
Iam a fan of War of Worlds and have two audio plays, the original book, two movies. I regret buying this edition.