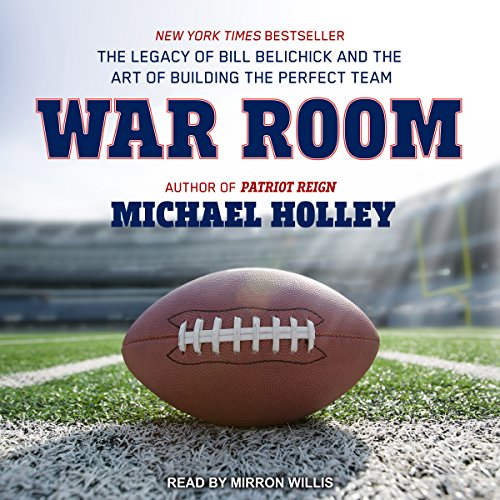 By: Michael Holley
Narrated by: Mirron Willis
Try for $0.00

Bill Belichick is one of the titans of today's game of football. Now, sports commentator and best-selling author Michael Holley follows three NFL teams - the New England Patriots, Kansas City Chiefs, and Atlanta Falcons - from training camp 2010 through the Super Bowl and into the April draft, opening a new window into Belichick's influence on the game.

This one-of-a-kind exploration takes football fans behind the scenes of the most popular sport in America, with unprecedented insider access to the head coaches, scouts, trainers, and players who make the game what it is - including new insights from Bill Parcells, Todd and Dick Haley, and Belichick himself.

For true fans of the game, and for fans of Badasses, Patriot Reign, and Boys Will Be Boys, Holley's War Room is not to be missed.

What listeners say about War Room

This is a story done wrong by whomever chose the narrator. The narrator's voice is that of someone reading by a fireplace as a professor at Oxford. He doesn't know how to pronounce very famous players' names. He pronounces routes roots. Come on man. The guy has no clue about what he is reading. Find someone with excitement and anticipation of the game stories and has some intensity to his voice. It takes the book story down a few notches because the reader/listener is constantly distracted by the narrator's lack of background in the NFL, the Patriots and football itself.

Booooooooo! What were you thinking?

Would you be willing to try another book from Michael Holley? Why or why not?

Probably. But, dude, know your listener and match the narrator with the storyline.

Who would you have cast as narrator instead of Mirron Willis?

Me. I could have done this in my sleep and kept the listeners on the edge of their seats.

Did War Room inspire you to do anything?

Study the game as much as I can. I am a coach.

Be a marketeer. Do homework and get someone to tell the Belichick story with determined excitement and masculinity that matches the characters in the story.

The narrators voice is a poor fit for this story. It is very hard to listen to.

This book is great for any football fan. I as a Green Bay Packer fan I’m not a New England Patriots junkie but the insights gained from in this outstanding organization presented in this book make it worth reading.

worst narrator I have ever heard in my life!

this was the worst narrator I've ever heard in my life. He mispronounced very popular names sounded like a robot most of the time and was extremely boring! I will never ever ever get a book read by him again. I was disappointed in the overall story as well. Probably my misconception of what it was supposed to be about. Thought it was going to be more about Belichick and it wasn't. Overall I did learn a number of things as I grinded through the terrible narration to try to get some content out of it.

Narrator could be better.

Not sure narrator is even human

I have no opinion of this book or its contents. This is due to the fact the narrator/robot used for it was so irritating and awkward to listen to that it was actually impossible to listen after less than 5 minutes. I actually thought there was something wrong with my setting or speakers it was so bad. How anyone could think this was a good choice for this book is hard to fathom. Horrific

not to be mean but, great content, hard to listen to the vocals. sorry Mike Holly

So hard I couldn't finish the book..Narrator was a terrible choice.....rest of content may be good but at chapter 3 , I was done....worst narration ever....

The art of the War Room is in demonstrating how discipline, adherence to standards, and being able to focus a large group on a single goal is done with the best of intention, and winning is not the only benefits. This group becomes family and the family grows over time. Yes, it is about management and football but more importantly, the War Room is a story of the social benefits of creating something amazing!