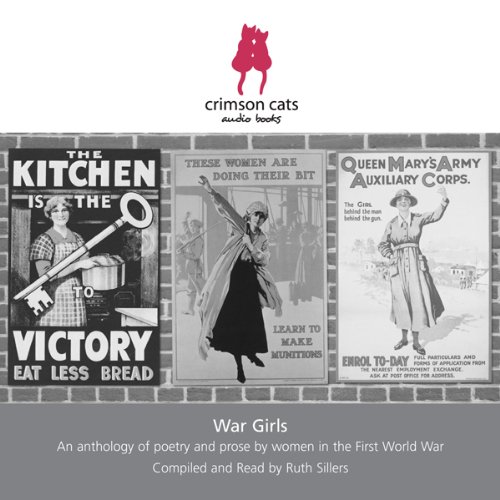 By: Various
Narrated by: Ruth Sillers
Try for $0.00

An Anthology of Poetry and Prose written by Women in the First World War.

War Girls is a commemoration and celebration of the remarkable, often deeply moving and largely unsung experiences of women in the First World War told in their own words. Through poetry, journals and letters this audio book documents the contribution made by women from all walks of society - from campaigning for peace to working on the home front and in the services. Some are the writings of established poets and novelists but many more are the records of ordinary women living in extraordinary times. They detail not only personal hardship and suffering but also the joy and excitement of a new society emerging as the war brought women challenges, freedoms and possibilities previously unknown to them. A century on, their experiences are still as compelling, powerful and relevant as they were at the time.

Ruth Sillers has performed in many plays and musicals for theatres in London's West End, notably the National Theatre Studio, the Young Vic Theatre and the Royal Opera House. Her television experience includes playing Mary Queen of Scots for BBC History.

Her radio credits include many plays and readings for BBC Radio Drama and she has recorded many audio books for BBC Audiobooks and many other publishers.

The pianist is Bill Byrne and the music tracks are:

What listeners say about War Girls

This is an informative, touching and well read Anthology of First World War Poetry.

Ruth Sillers reads with excellent pace and tone. There are many poems that deserve great applause- too many to note.
The regional accents are pitch perfect. The tone does not grate at all, quite the opposite.
I particularly liked 'Nantwich Farm Girls' due to the subject matter and accents. 'The Dancers' by Edith Sitwell is also excellent.
The narrator understands and empathises with the characters. This is evident in her tone.
I particularly like Last Leave by Eileen Newton and Diary 1918 London by Virginia Woolf.
Well worth a listen one afternoon or evening. I have given in five stars all round.
Big round of applause.

The first time I heard Ruth Sillers’ War Girls was on a British Airways flight on my way back from NY to London. I found the piece so moving while at the same time hugely entertaining, that I heard the whole anthology twice.

Each character came to life in nuances of age, accent, emotion and personality, all reflected in the voices so carefully created for each one of them. There was always some new aspect of those real and powerful stories, told with such simplicity that it made me feel very close to some of those war girls.

I was so glad to find it on Audible, where I was able to listen again.

This collection of prose and poetry presents an interesting insight into the part women played in the First World War.The women range from well known figures such as Virginia Woolf and Katherine Mansfield to ordinary workers like the clippies in the poem War Girls and the good time girl in the poem Munition Wages. The prose pieces are from diaries, letters, newspaper articles and speeches and include a woman who worked at MI5, a Land Girl, and an account of a factory explosion. A touching and revealing anthology.