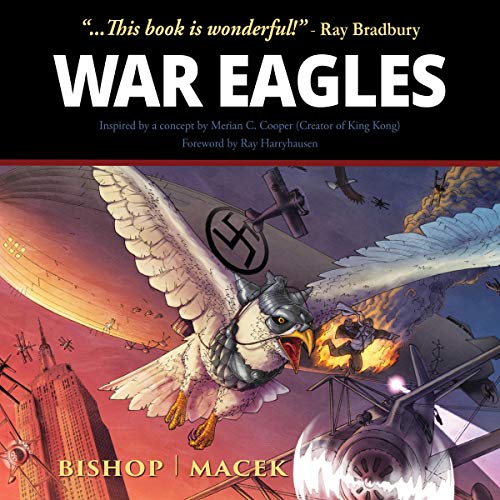 Inspired by a concept by Merian C. Cooper - the creator of King Kong. Foreword by Ray Harryhausen.

Just prior to the start of WWII a publicly humiliated Army Air Corps test pilot, court-martialed for an unauthorized flight that endangered the life of President Roosevelt, takes the only job he can get - flying an experimental airplane around the world from South to North poles. When his plane is attacked and crashes in the Arctic, he finds himself in an undiscovered land inhabited by a lost tribe of Norsemen who ride giant eagles and, in a surprising turn of events, becomes America's only hope against a devastating sneak attack by the Nazis and their powerful new electromagnetic weapon.

What listeners say about War Eagles

WW2 with a dash of fantasy!

I really enjoyed stepping back in time as the race for air travel was developing. One could truly feel the passion these pilots and engineers had for these magnificent machines.

The twist of stepping back into a land of Vikings and dinosaurs was very well executed.

Well done to both the author and the narrator.

This audio book reminded me of some of the 40's and 50's era tales, but what it happens to be is an alternative timeline World War II era fun adventure story. Think of a weird mash-up of a screw-up Captain America wanna-be mixed with the Land of the Lost mixed with Avatar where Hitler is the real villain and you might come close. At any rate, it's load of good fun and non stop action. But don't get distracted for a minute or you'll miss something! There are american pilots, Polish spies, Vikings, giant prehistoric eagles and, of course, Nazis! What more could you ask for to while away an afternoon? Our hero even gets the (Viking) girl! Put your feet up an get lost in what might have been.... *I was given a review copy of this audio book at my request in exchange for my honest review*

This is not an accurate historical fiction book, but rather an action-packed book set an historical time. I normally listen to my books at a higher speed, however the amount of drama and action in this book I had to slow it down. I like the storyline and the narrator however, the sound effects throughout the book did kind of throw me since I'm not used to that and most audible books. still I would recommend this is a good read

I Would Like to See this on the Silver Screen

Back in the late 1930s, the director of King Kong started planning War Eagles as his next block buster film. Then World War II intervened and the project languished for decades. It helps to know this background to fully appreciate this novel. It’s a big cinematic adventure waiting to find the screen. The heroes are larger than life, but more importantly, the images are bigger and more vivid than the mighty King Kong who reinvented the silver screen. And what are those images you may ask? Nazis developing super-science weapons for a sneak attack on America, Viking warriors riding gargantuan eagles in a time-forgotten land of dinosaurs, and of course, those same Vikings fighting Nazis over the skyline of New York City.

This book is a heck of a lot of fun. It starts a little bit slow but once the Vikings enter the story it chugs along at a heroic pace. There is a ton of action and colorful confrontations. Narrator William L. Hahn pulls out all the stops adding theatrical sound effects to his wide repertoire of voices which adds a completely appropriate cinematic feel to the entire story. If you’re looking for some genuinely heroic fantasy, you should try War Eagles.

War Eagles is a really good adventure story. William H. Hahn has an excellent voice and is a great narrator.

This isn't a genre I would usually read or listen to, but I was intrigued by the combination of giant eagles, Nazis, air force pilots and Vikings. I had also listened to another audiobook narrated by Will Hahn, and had been impressed by his work there. A good narrator can 'make' an audiobook, and Will's efforts re characterisation, sound effects and layering added dimensions to this novel that I appreciated and enjoyed. I'll admit, I wasn't wowed by the story - in fact I sometimes lost track of what was going on - but the telling of it, its rendering, allowed me to get through this very quickly. A good effort by all, and particular thanks to the narrator!

War Eagles a interesting view into the past.

It was hard to get into but once into several chapters it became very interesting and kept me listening.

I enjoyed this book!It was like a radio show from the forties!A bit of reality with fiction tossed in.A man is dimissed from the Aircor for crashing a plane.On his way out of this meeting he is hired by a company to fly for them.Of course he saves the world!There is a lot in betwen.Read it. WIlliam L. Hahn was a terrific narrator.I was given this free review copy audiobook at my request and have voluntarily left this review.

I was provided this book free of charge in exchange for an honest review.

I grew up on such things as Edgar Rice Burroughs and Sir Arthur Conan Doyle and so the synopsis of this story really appealed to me as it read just like a Centre of the Earth tale with an unknown civilisation and a lost world. What we actually get is a really pulpy adventure tale involving dinosaurs, dog fights and evil Nazis.

Why then, you may ask, have I scored it a 3 for story? Well, the issue is not so much the story but more the writing!

There are so many scenes that should be extremely thrilling and exciting but the way it is written, means it really does fall short. A prime example is towards end when a daring battle above a zeppelin describes the battle as "The balloon tilts, another cable snaps and the section of the catwalk Brant is on jolts loose falling out of the zeppelin. Brant and Coppelman fall 30 feet below the zeppelin. Grant catches a cable . Coppelman grabs onto him." The almost complete lack of adjectives leaves the whole scene, along with so many others, extremely flat and lacking any real sense of excitement.

Another issue for me is how we learn, and experience so little about the lost land where the Vikings live. I'd love to have met other tribes in the land,maybe ones who weren't completely lacking surprise over meeting and outsider but the whole place just feels lifeless and safe.

Narration-wise, the reading is done very will and encapsulates the pulpy feel perfectly, making it all sound like one of the tales told during the golden age of radio. Unfortunately, the lack of interesting characters, and the poor, almost comic-book writing-style, means they don't really have an awful lot to work with but they do a bang-up job with what they have.

Negatives aside, what we see of the setting is really good, with the VIkings, dinosaurs and those dastardly nazis all coming together and clashing in some exciting aerial battles and I do feel that, for the right person, this would be a wonderfully exciting story.

For me though, the writing was flat and the scope far too small to really hold my interest and so I doubt I'd be listening to this one again.

I found the mix of cultures and how they ended up working together truly interesting.

I really enjoyed the layout of this novel as a screenplay- it really helped to get into the story. It was clearly a massive work of fiction, but I enjoyed it in the style of She and other books of that style.
I very much enjoyed the narrator and thought he gave life to the characters.
Overall worth a listen even if it’s just to hear Americans talking smack about Nazis.

The scenes and characters are all vividly presented and loved the different settings, from New York to the wild Arctic.
I'd would have loved if this was fleshed out into a longer novel as at time story lines wrapped up abruptly and shifted onto something else.
The narration is excellent. Really nicely paced and I also really enjoyed the added sound effects.