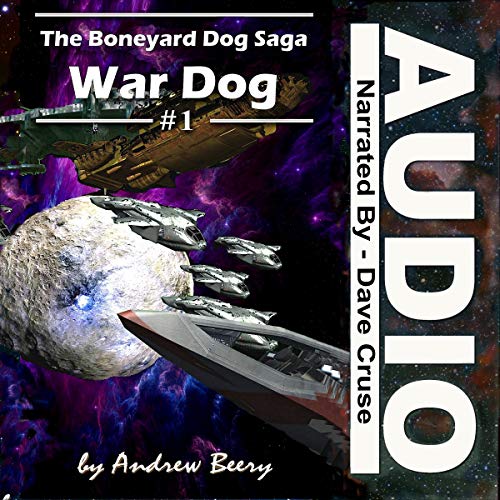 By: Andrew Beery
Narrated by: Dave Cruse
Try for $0.00

Did you ever wake up wondering where you were…and perhaps equally important, how you got there? Yeah, me too. The only the thing is, it usually happens when I've been drinking…and I'd been dry for the better part of two years. I'm Commodore Jeremy David Riker…my friends call me JD or just plain “Dog.” I have the dubious honor of running a starship boneyard in the middle of nowhere.

What listeners say about War Dog

Fantastic narration for a space opera

Space opera meets military fiction in this non-stop action tale. The narrator of the tale is a naval officer who was banished to a spaceship boneyard on the outskirts of the solar system. He's jaded and spends his days with his team drinking and scrounging for useful junk. Then, out of the blue finds himself recruited to lead a galactic struggle against an unknown enemy (an enemy that's not attacking humans - yet - but other, peaceful aliens). Oh, and there is his wife who left him, and who now has reappeared and is also recruited, so that besides the idea of saving the galaxy, there's saving a floundering marriage - but it works, I actually loved the parallels! There was lots of humor, some twists and surprises, androids, clones, aliens, and a great dialogue. It is a good start to what could be an interesting series. What really brought this story to life for me was the narrator. Kudos, Dave Cruse, for making this story really shine!

This book was a bit different in that it was military battle, alien cultural interface and soul searching.

A man and woman from Earth find themselves abducted and cloned to assist and alien culture fight a war with an unknown enemy. They choose these people since they believed they would have a better ability being more generalized than the races that each had a specialized role in their society.

The action was good and the situations were complex. The interpersonal relationships were also interesting. A fun listen and very enjoyable. I look forward to the sequel.

The narration was outstanding. The characters were distinct and the voice range remarkable.

This book was provided free of charge with expectation of an honest review.

Commodore Jeremy Tyler wakes up with a splitting headache and one of those "Where am i ? " moments. When he and his wife had seoerated, her father, the Admiral, had reassigned him to command of the Boneyatd, the graveyard where derelict spaceships to go die. Many, many spaceships. So many, that an alien in search of a warrior to fight for the survival of the galactic order, he is seen as the officer in charge of the greatest number of warships and clones him! And his wife. I

Although this is a full on military, battling science fiction story, it is also full of humour, especially in the earlier part of the.book. Told in the first person by Tylor himself, his fondness for Star Trek shines through in his commands to his crew. Some tidying up editorially here and there would improve the quality and resolve missed opportunities like the fears of a saboteur aboard ship. The character development is fairly shallow but perfectly adequate for the story. And the interplay between J.D. and the aliens is fun. One comment which I personally appreciated was, when told about the near genocide of an alien race, the commander comments on their decimation, only to be told that was not so. With decimation, only one tenth of their population would have died. Their loss was almost 100%. How refreshing to not only have that word used correctly for a change but also for one character to even reprimand another when using it incorrectly (especially when it was the alien to the eartbman!)

Narration was by David Cruse. He carried the text well, with good pacing, modulation and just the right amount of slick amused investment in the text to fully fit the character. Good individual voicing for every ptotagonist, too. A fine performance which made the book even more enjoyable.

I received War Dog at my request, as a complimentary copy, from Free Audiobook Codes, and would like to thank the rights holder for making it available for anyone who wants to freely download. I very much enjoyed the earlier parts, not so much the battles that ensue, though even they are not overly prolonged and have their special moments. As an easy to read, non taxing, fun science fiction book with some curious characters, I would definitely recommend this book, and I'm looking forward to the second in the Boneyard Dog saga.

Corny and then. turned out very interesting

Have to say at first I was disappointed in the story as the story got further alone you are pulled into the story and not able to stop listening due to an author who is a very talented writer and a narrator who can bring the story alive and not sound like he is just reading a book to you.
The basic story is a race comes to earth for help but not wanting to be seen looking for a commander and nurse instead of taking the real persons they clone them and give them inhansed abilities thru neuro inhansed means that look like hair dryers. As I said I first I was disappointed at this time with the bringing these hair dryer devices and was about to stop listening and then author changed the storyline and started drawing you and you are honked. From the technology that told would be awesome to have a way to make a person young again because the crew that was brought on board were men who were over 70 years old and you watch the get younger and thru the technology more advanced.
You meet talking Otters, Worm looking creatures and others who will grow on you and when some die you feel it. Now there is a war going on and the attacking race is unknown in who they are or look like instead all you learn is they are destroying whole planets and races to find what is called ancestors artifacts and when they do they adapt it to their use. Later in the story you find who they are and what they look like be ready for a surprise!

I was kind of put off that it was only 5 hrs long but after a few chapters in I knew why. it really takes all the fillers out in the story. I love details in a story but I don't need to know every jack and Jane thoughts on the battle. the story is told in a past tense kind of way while dropping hints of future issues. if this book had filler like 95% of other sci-fi book then it would be over 10 hrS but this book cut to the meat of the story. my only problem is the mc wife and how he buckle s under the old saying happy wife happy life. well I could not relate to him in this matter as I'm a very cut through the BS kind of guy and would not bend to the will of my wife like he does. also a small bit of religious stuff but as atheist I have no problem with it and it doesn't beat you over the head with it. my last thing I have to say is since I served in the us navy I can say that the amount of officers on a bridge is very small and most of them are manned by enlisted. also the enlisted are more knowledgeable than say a ensign or LT jg when it come to come or even steering the ship. I know they follow the star trek theme but that was always my pet peeve with the show. too many chiefs in one tent

nice cliffhanger, now I am searching for the next book. I really enjoyed the writing style good character building and making me feel like I know them.

The headline was to grab your attention, in actuality the story is fine audiobook. The author could have fleshed this book out, therefore creating three, or more books. But it is a fine story as is. Narrator does a great job, and I will be looking into other stories he has narrated.

Summary: Jeremy Riker wakes up feeling like he must have had a really bad night. Turns out he’s been elected to save the galaxy.

- Aside from the main characters affiliation to his past job, the whole boneyard dog angle is kind of lost on me.

- The blurb is stylistic but tells the reader zip about the story. The only thing you get out of it is a sense for the writing style. It’s first person, lighthearted, and tongue-in-cheek for the most part. If that style works for you, you’ll probably enjoy it. If it ticks you off, avoid like a plague.

- Quite a few places have comments referencing future events. While an okay tactic to use once in a while, it got old very quickly.

- Content warnings: Nothing described but a lot of innuendo. I think there might be a curse word or two.

- Lacks a sense of closure. It’s very short for a scifi story, which isn’t necessarily bad. It falls into that series trap of “we won, or did we”?

An intriguing start to a fun series. If you can get past the few annoying quirks, you’ll probably enjoy the tale.