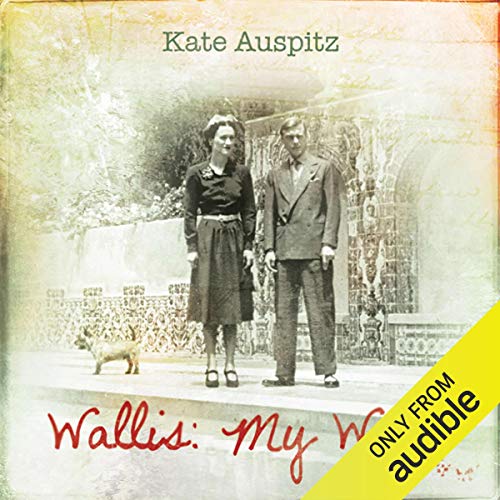 By: Kate Auspitz
Narrated by: Lorelei King
Try for $0.00

She was the first person to be named Woman of the Year by Time magazine, and yet Wallis Simpson remains one of the most reviled women in history. The social-climbing divorcee is remembered as a snob and voluptuary who came close to destroying the British monarchy. But could she have been the pawn of Allied statesmen determined to remove a Nazi sympathiser from the throne?

This memoir, found in her former Paris home, is said to have been written in the Duchess' own hand. And although the Duchess is a highly unreliable narrator, Kate Auspitz, an American historian, is a meticulous scholar, supplying pages of endnotes that ground the story firmly in published recollections of the major figures of the time. The plot rests on little-known historical details that make Wallis's role in the events entirely plausible.

"Lorelei King is astonishing. I thought I was listening to my better self when I heard the introduction to Wallis: My War , written in my voice, read in hers." (Kate Auspitz)

What listeners say about Wallis: My War

Fun and interesting, too.

Would you listen to Wallis: My War again? Why?

I might, just to catch any details I missed the first time.

What was one of the most memorable moments of Wallis: My War?

The very end of the book holds an image I won't forget.

I really enjoyed the plotting among the afternoon cocktails.

I have to keep reminding myself that the book is fiction.

Always one for a biography, I chose Wallis My War for an insight into the woman that caused the abdication of the king. Written from her point of view was the clever bit. I enjoyed the regular ramblings from the woman's point of view, the details of what was her life in relation to his. I did find the voice very irritating at first that I did not listen to it for a while. However I had another go with the presumption that this is what she probably sounded like. Ir is worth persevering with. This is my first audio book, perhaps I am not quite ready to stop reading the printed versions yet, not sure if I ever will as it was not a very enjoyable experience.

I needed to be in the mood for this

I am still not sure if I have truly given this a fair rating as I think the narrator put me off listening to a good story line. I found it hard to be objective and remove the voice from the story. Apologies but this wasn't for me. Perhaps listen on another day maybe a different outcome.

An unusual perspective on a controversial woman

This is a vivid and engrossing, albeit fictional, account of how the Duchess of Windsor was used as a pawn by the Anglo-Franco-American alliance, first to get a king to abdicate and then to spread disinformation amongst the Axis, via Ribbentrop. Not a book you can stop listening to easily.