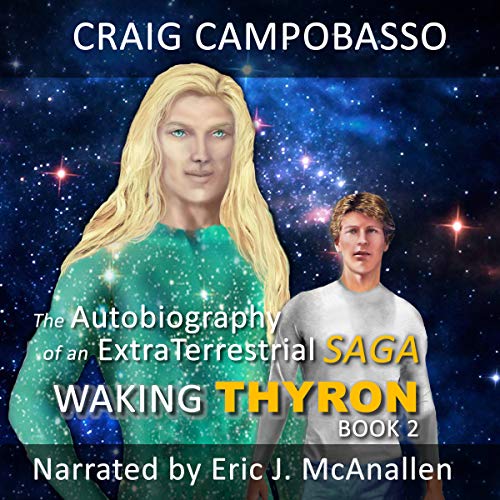 By: Craig Campobasso
Narrated by: Eric J. McAnallen
Try for $0.00

In 1959, an extraterrestrial incarnated on Earth. He doesn't remember who he is, but his cells hold his past-life memories. After 26 years of spiritual education as a human, Cosmic Thought Adjusters determine that he is ready to know the truth, so they awaken him to his heritage. He was an instructor at the University of Melchizedek, where he trained Mighty Messengers to incarnate on Earth for secret "consciousness-raising" programs, and in this incarnation, he has traveled with them.

This is the autobiography of Solar Commander Thyron - whose mission it is to unite Earth with Universal Society. Now that this Earthman's heart rules his mind, communications with enlightened extraterrestrials are permitted, and a trip to his home and awaiting family in the Pleiades Star System is facilitated. Ultimately, Thyron's Earth body is put into a slumber, and he is returned to his former Titan self.

His family reunion is short-lived in the face of a galactic crisis. The evil forces - knowing of his brief homecoming - steal what is most precious to him, luring him into direct combat. His only armor is courage and a powerful Crystal Light Sword of Truth, given to him by Archangel Michael, his sovereign, just before he is thrust into the most barbaric cosmic war ever recorded. His enemy, the Dark Sa' Tan, commands the Brubarian armies - terrifying beasts, who wield impressive black-art technologies.

Now a leader amongst extraterrestrials in the Star Seed Alignment of Space Peoples and Planets, the fate of the universe hangs in the balance, and not even Thyron can imagine what awaits him.

What listeners say about Waking Thyron

Very entertaining! I hadn't read/listened to the first in the series but, with that said, I enjoyed this audiobook!
Thought the story was fascinating and very creative, very well done :)

I thought the writing and narration were great, I really enjoyed listening. I hope to hear more from both author and narrator!

So, I enjoyed book 1 enough, and was curious, so I picked this one up. I'm glad I did. It was just as engaging and entertaining as the first. The plot and characters still continue to be interesting and unique. The narration is well done, too. All in all, a good pick if you want something a bit different for your sci fi cravings.

This is the second book I’ve read/listened to by this author. I tried book one in the series and had a hard time getting into it. I thought I would try this one, based on a comment I was given, that it got better. I still found this difficult. I have no interest in the characters and do not feel connected to them at all. For a higher being society they’re very petty. I’m afraid I could not finish the book.

This is the first book I’ve listened to by this narrator ( Eric J McAnallen ). He did a ok job. His narrating is a bit stilted. The characters did have individual voices and there was some emotion he brought into the book, but the cadence was awkward

The book is rated V, L on Audiobook Boom but I did not come across any explicit sex scenes, excessive violence or swearing in the portion and I listen to.