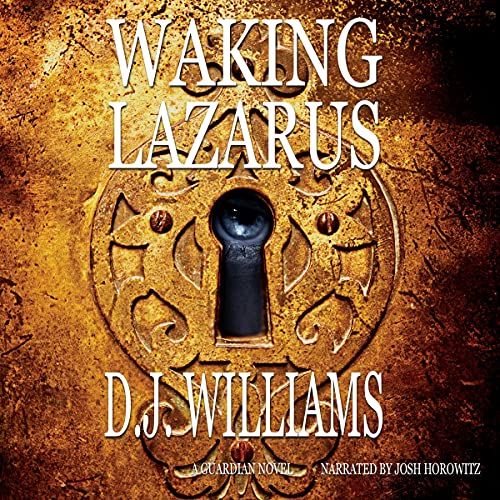 Jake Harris' life hasn't turned out the way he planned. Battling his addictions, and the shattered pieces of his family, he is hired to ghostwrite a memoir. From the 1920s story of a controversial evangelist, to the present day mystery of a former District Attorney, everything changes when his search for the truth leads to an atrocity hidden from history. With a past he can't remember, he begins to discover that he is not the person he believed himself to be. Rather, he is a threat to a secret society that has remained in the shadows for nearly a century. Jake is drawn deep inside a world he never knew existed that brings him closer to his own extraordinary destiny.

“A captivating visual story with a colorful narrative. Once I started reading, it was hard to put down.” (Peter Anderson, Oscar Winner, Cinematographer)

What listeners say about Waking Lazarus

This book kept me up trying to finish it

I have a love-hate relationship with books that you can't turn off. on one hand it is fantastic to be able to get so immersed in a book that you can't tear yourself away. On the other hand that means you lose out on sleep, end up going places late, or canceling altogether; I may have been guilty of all of the above.

I finally turned this book off at 3 a.m. last night, when I could not stay awake any longer to finish and couldn't wait to get away alone so I could listen to the rest today. This book spans history you start with what looks like a current murder, in Los Angeles, and you end up learning a lot about a charismatic Evangelistic preacher from the prohibition era.

Tying all of this together is a government born Secret that is horrifying but at the same time was done with the right thought in mind, but oh that's a situation should never have happened.

I will definitely be on the lookout for other books in this series, the author really has a way with painting precise pictures with words not all those pictures are gorgeous but you will remember seeing them.

The storyline was interesting, if a bit confusing, on occasion. It was full of action and transported us across to Hong Kong and Africa. Many characters in the Disillusioned makes an appearance in Waking Lazarus towards the end. Look forward to seeing how the next book brings it together.

Josh Horowitz did an outstanding job with Character vocals and foreign wordage.

Let me say up front that I have not read book 1 in this series, but I was able to get the gist of it and follow along pretty well with the parts of the back story that were mentioned in this story. This is a very detailed, complex story. There is a lot going on here, a lot of action and suspense,
A lot of emotion, and a bit of romance as well. This isn’t the type of story I usually read, but I really enjoyed it. I think the characters are mainly what kept me interested. The fast-moving action was a bit much for me, but I would recommend it for readers who like that type of story.

I listened to the audio version, which I think is one reason I liked it. I probably would not have liked it as much if I were actually reading it. I think I would have ended up skimming parts of it.
Narrator, Josh Horowitz, did a really good job with the narration.

This story is pretty captivating from the beginning. I was glad I listened to it. The Author creates well developed characters, a riveting story with so many added embellishments while adding a nice twist for the listener. There are Government conspiracies, Evangelist extremists, and even a Secret Evil society! This is great listen, if you enjoy thrillers give this book a try. The story is well worth it, give this page turner a try!

This was a good book.It just did not grab my attention like some others have.It had all the magical elements twisted with religion etc. Josh Horowitz was a fine narrator. I was given this book by the narrator,author or publisher free for an honest review.

The author does a wonderful job bringing this story together! The characters are brought together in such a way that you feel like you know them. The storyline is unique and refreshing. Had me hooked from the start! I look forward to listening to future books in this series. The narration is well done, helping the story flow and keeping you hooked.


I have been given a free copy of this book in exchange for an unbiased review.