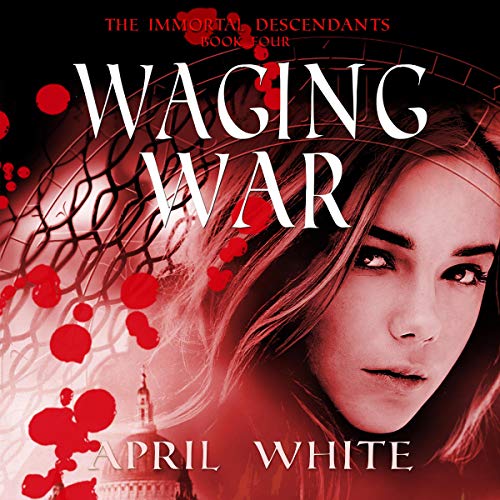 By: April White
Narrated by: Sarah Kempton
Try for $0.00

War is being waged against the descendants and Saira Elian is desperate to stop the Mongers’ savage bid for power....

Saira’s search for kidnapped mixed-bloods draws her into the Mongers’ stronghold, revealing the horrible truth behind the irresistible Monger ring and the vile plan to cleanse Family bloodlines...permanently.

Under threat of a brutal massacre, Saira and Ringo travel back to Bletchley Park during World War II where they team up with Archer from the past to crack a Nazi code and expose a Monger intent on changing the course of history. They join forces with a female commando from the French resistance to hunt down an elite unit of Monger soldiers - Hitler’s werewolves - before the terror squad can strike a fatal blow at the heart of the allied war effort.

Their manhunt drags Saira, Archer, and Ringo into the London underground on the eve of a Nazi bombing raid where they come face-to-face with the Monger assassin on a suicide mission. With the lives of all mixed-bloods in peril, Saira must make a sacrifice that even time may never forgive.

What listeners say about Waging War

Why did you change the narrator?

I hate the new voice! The tones and accents are all wrong. Connor and Logan suddenly have their mother’s Irish accent, and Archer’s voice and speech is all wrong. I love The Immortal Descendant series, but it’s just terrible to change narrator after 3 books! Not even the word monger is pronounced correctly. I fell in love with the characters as they were- voice and all. I feel quite blindsided and out out by this change.

great continuation of the story

This chapter of Saira, Archer, and Ringo’s journey is set well within the present as well as fully entrenched during WW2 in Britain and France. This book is not without heartache and that is so beautifully translated in this audiobook. I loved this experience. You absolutely cannot go wrong with April White.

This continuation of April White's Immortal Descendants series is such a delight. So well written.

I was sorry to see the decision to replace narrators in this series. I didn't enjoy this book nearly as much as the previous three because I couldn't imagine the narrator as a teenager.

I love this book! April White is a phenomenal writer. I love the way that she includes real history. The story pair with Sarah's narration is pure perfection!

I did not want to get out of the car. I can't wait for the next book to be ready on Audible.

very Interesting story I am sure I will re-read many times. I am waiting for the next audio book in the series.

Having read the books some years ago I am now listening to them all. Whilst the narrator is good i don't think she brings as much to the narrative as the narrator of the first three books. I'm just about to start the next one and find it hard to stop listening, even though i know what happens. I am enjoying them so much more the second time around. These should definitely be made into films. They would be wonderful.

Hold onto your seat this ones a rollercoaster

Another gripping instalment in the Immortal Descendants series. This time travelling through World War II in England and France. This was a reread but there were things I spotted I hadn't noticed before which made it feel almost new.

I'm glad we finally get an audio book of this, sadly the previous reader couldn't complete the series but Sarah Kempton reads well, though it took a while to get used to some of the accents.

I would recommend starting with book one as each book builds on and develops our understanding and knowledge off the descendants especially Saira and Archer. Have book five ready to move on to, you'll need it.