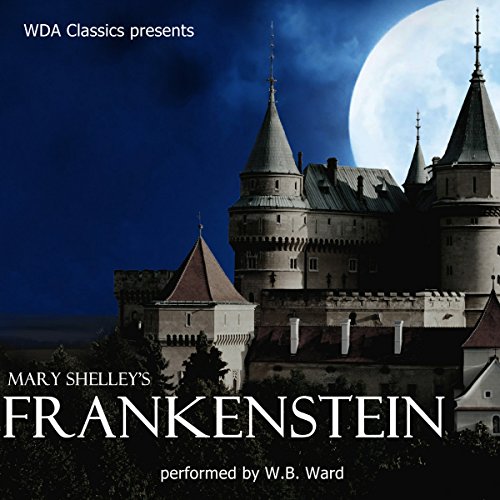 WDA Classics is proud to present another classic, Mary Shelley's Frankenstein, or The Modern Prometheus. This is the original story of Victor Frankenstein, a young scientist who creates a grotesque but sapient creature in an unorthodox scientific experiment.

This is my favorite narrator, his voice is amazing. He almost spunds like Kurt Russel

The story is a classic. As an avid reader, I always meant to read this book but never really got around to reading it. lol. Just listening to it now I have been missing out. The story itself is impressive. Few books today are written with such eloquence. I enjoyed the narration, it was pleasing and flowed at a good clip. l would recommend this book to everyone. I would also recommend this narrator. I will be listening to more of W. B. Ward.

Not only is this one of the most revered science fiction stories, the performance by the narrator is incredible. Frankenstein is a mother of modern science fiction and developed some of the most widely used science fiction tropes and story style. Even the more modern A.I. takes over the world stories owe much to this tale. The narrator does a masterful job of not just reading but infusing the tale with the emotional weight of the original text. He creates voices for the character that are both classical in nature and sincere. There was moments I found myself almost crying along with the characters as they fast hardship. I highly recommend this audio book!!

Would you consider the audio edition of WDA Classics Presents Mary Shelley's Frankenstein to be better than the print version?

I can't say. I never read the book. After reading this, I wish I had.

What was one of the most memorable moments of WDA Classics Presents Mary Shelley's Frankenstein?

Most of the book. All I've ever seen were the Boris Karloff movies about Frankenstein. This is so different from those movies! It shows how the monster was the real victim, his need for social interaction, and never wanting to hurt anyone. Instead, he's feared because of his size and looks. He never terrorized the villagers nor did they chase him with pitchforks. Victor Frankenstein is the real monster in this classic version.

Which character – as performed by W. B. Ward – was your favorite?

A story of discrimination.

A must-hear for anyone like myself who has never read Mary Shelley's classic!

This book was nothing like I thought it would be. All of my preconceived notions were incorrect. I was amazed at Mary Shelley's writing this at such a young age! I really enjoyed it. Once again W.B.Ward shows off his vocal chops with yet another terrific narration!

This is a great listen. I really enjoy a wide variety of stories and I have become a loyal fan of WB Wards work. If you enjoy fiction of any kind you will enjoy this audiobook. If you enjoyed Ward’s previous narrations this one will not disappoint. If you haven’t this will make you a fan and you will want to search out his other work (it’s worth the effort!) to listen to.

The story was good and I must admit, is the first time I heard this story. Not normally a book I would have searched for and listened to but since I’ve enjoyed Ward’s work I figured I’d give this a shot. I really enjoyed the book and I would absolutely recommend it to you!