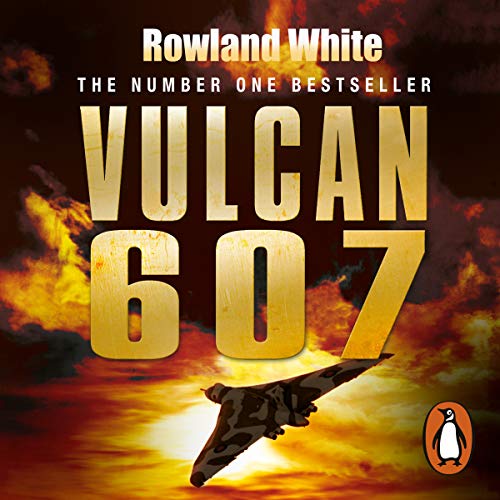 By: Rowland White
Narrated by: Roy McMillan
Free with a 30-day trial

It was to be one of the most ambitious operations since 617 Squadron bounced their revolutionary bombs into the dams of the Ruhr Valley in 1943....

When Argentine forces invaded the Falklands in the early hours of 2 April 1982, Britain's military chiefs were faced with a real-life Mission Impossible. Its opening shot, they decided, would be Operation Black Buck: to strike a body blow at the occupying army and make them realise that nothing was safe - not even Buenos Aires....

The idea was simple: to destroy the vital landing strip at Port Stanley. The reality was more complicated. The only aircraft that could possibly do the job was three months from being scrapped, and the distance it had to travel was 4,000 miles beyond its maximum range. It would take 15 Victor tankers and 17 separate in-flight refuellings to get one Avro Vulcan B2 over the target and give its crew any chance of coming back alive.

Yet less than a month later, a formation of elderly British jets was launched from a remote island airbase to carry out the longest-range air attack in history. At the tip of the spear was a single aircraft, six men, and 21 thousand-pound bombs, facing a hornet's nest of modern weaponry: the radar-guided guns and missiles of the Argentine defences. There would be no second chances.

It was the end of an era - the last time the RAF flew heavy bombers into combat before they were replaced by their digital, fly-by-wire, laser-guided successors. There were many who believed it couldn't be done.

Drawing on extensive interviews with the combatants, Falklands residents and British High Command, and with unprecedented access to contemporary military records, Rowland White takes us, for the first time, to the beating heart of the legendary raid. Vulcan 607 is a story of ingenuity, courage and sheer bloody-mindedness that's destined to become a classic.

What listeners say about Vulcan 607

The channel 4 documentary on this is good but the book has more detail. The narrator does justice to the subject. You wonder how they achieved the mission, remarkable.

I've read it twice and now listened. Captivating from start to finish. Ranks as a favourite. Brilliant story of some truly remarkable people.

Didn't expect this to be so gripping

Wonderful read. I got totally immersed in this one. Highly recommended. Audible need to list more of this type of book. Tally Ho!

This was a true story of RAF spirit, dogged determination and just getting the job done. Brilliantly narrated and expertly put together, it really evokes the feeling of being there and the visceral, emotive feelings the crews had completing this mission. Nothing less than an excellent read/listen!

This was one of those treasures in the Audible library: a true story of gritty determination, last-minute delays and failures, a story of human courage and the fickle chances of warfare and aviation. Ultimately a human tale, the story of the obstacles overcome to plant a stick of bombs on the tiny runway at Port Stanley deserved the fantastic writing skills of Rowland White and the great story telling of Roy McMillan. I know from personal experience the accuracy of most elements of this yarn: it’s a story told with passion and precision. Not since Endurance have I enjoyed an audiobook this much.

loved it , story of getting job done against the odds love the Vulcan fab

This was a great telling of a story of events happening whilst I was a young boy. Excellent.

One of the best books I've read/heard on audible. What these guys did was incredible. Really, actually, incredible. You won't be disappointed.