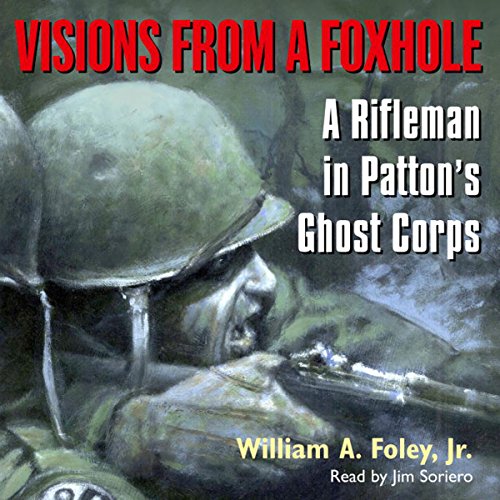 Visions From a Foxhole

By: William Foley
Narrated by: Jim Soreiro
Try for $0.00

An absolutely harrowing first-person account of the 94th Infantry Division's bold campaign to break through Hitler's "impregnable" Siegfried line at the end of World War II.

Eighteen-year-old William Foley was afraid the war would be over before he got there, but the rifleman was sent straight to the front lines, arriving January 25, 1945 - just in time to join the 94th Infantry Division poised at Hitler's legendary West Wall. By the time Foley finally managed to grab a few hours sleep three nights later, he'd already fought in a bloody attack that left 60 percent of his battalion dead or wounded.

That was just the beginning of one of the toughest, bloodiest challenges the 94th would ever face: breaking through the Siegfried Line. Now, in Visions from a Foxhole, Foley recaptures that desperate, nerve-shattering struggle in all its horror and heroism.

Features the author’s artwork of his fellow soldiers and battle scenes, literally sketched from the foxhole

Look for these remarkable stories of American courage at war:

Behind Hitler’s Lines: The True Story of the Only Soldier to Fight for Both America and the Soviet Union in World War II by Thomas H. Taylor

The Hill Fights: The First Battle of Khe Sanh by Edward F. Murphy

No Bended Knee: The Battle for Guadalcanal by Gen. Merrill B. Twining, USMC (Ret.)

The Road to Baghdad: Behind Enemy Lines: The Adventures of an American Soldier in the Gulf War by Martin Stanton

What listeners say about Visions From a Foxhole

This book is less esoteric than other memoirs and historic accounts. It feels more action movie-ish than mini series drama. However, it is enjoyable. I like it. I listen to military and political books. It’s nice to have shorter less serious books for when I’m trying to fall off to sleep. This one is fun, whereas a lot of other war books are either grimly realistic in their approach of describing war or very dry big picture histories and analysis. I am particularly fond of the dry stuff and have shelves littered with books that would put your average person into a coma. Sometimes it’s nice to just listen to something less serious. So if you like military or history books and want something not as deep as your usual personal account pick this up. It’s not cheesy or anything like that. It author doesn’t make light of what happening. But the descriptions and action sequences aren’t designed to shock you with the horrors of war and are just to tell the story.