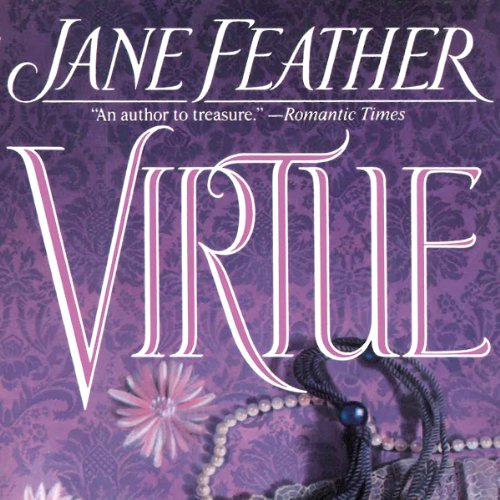 By: Jane Feather
Narrated by: Gemma Dawson
Try for $0.00

Duping unwary nobleman out of their fortunes in the gaming halls - a dangerous game she plays in order to raise money to avenge her father's death - Judith Davenport finds herself under the scrutiny of the honorable Marquis of Carrington.

What listeners say about Virtue

Even though the type of romance between Judith Davenport and Marcus Devlin, the Marquis of Carrington is not my favorite, I still found VIRTUE to be an alluring and compelling novel.

Marcus first encounters Judith and her brother Sebastian in a gaming hell in Brussels as he notices how they work as a team to cheat others in card games. Marcus was even more outraged as his cousin Charles, was one of their victims---but a happy victim, at that, due to all of the attention Charles received from the beautiful Judith. After confronting Judith, Marcus quickly finds that what first began as anger, quickly turns into intrigue, and then an obsession. Judith has the same kind of reaction to him. Marcus and Judith’s paths become seared to one another after one night of passion, and inevitable consequences. However, neither of them really knew anything about each other, and what odds can be riskier than the venture of love?

The reason this TYPE of romance is not my favorite is because of the hard “growing pains” that occur within the relationship, as both hold deeply guarded secrets. Judith and her brother Sebastian hold close to their breast the secret of revenge, as they plan to avenge the ruin of their father from the Earl of Gracemere. Marcus also nurses secrets that he is set on hiding from Judith. So herein lies the problem: when you have to put so much effort into hiding a secret those secrets become covered by layers of lies and soon the relationship feels like a house of cards. Yet, don’t untold secrets create the best kind of stories??? And let me tell you, Jane Feather really knows how to tell a story!

In this novel, the villains and protagonists are very closely connected, and the unfolding of this connection is what makes this story so interesting. All of the characters spin dangerous games with one another and the risks always feel high. This plot continually seems to take the reader close to a precipice, and right when you think everything is going to fall apart for the protagonists, it just ends up working out in the nick of time!

Both leads are very independent and strong-willed and I was happy to see them find their HEA. Marcus affectionately refers to Judith as “Lynx,” and I thought that term of endearment was cute. Despite flaring temperaments and wills, both leads form a love for each other, that they both know, is beyond reason. I really liked how Marcus supported Judith, even during the more stressful moments in their relationship and surprising revelations. 4 Stars for a well-written novel! I really like the narrator, as well.

On to the next book in the series!!!

Another great story from the series. Loved the audio adaptation and love that this plot went in a slightly darker direction.

I was very keen to listen to another book read by Gemma Dawson and I enjoyed Jane Feather's writing in Venus so much that it made sense to get the next book in the series.