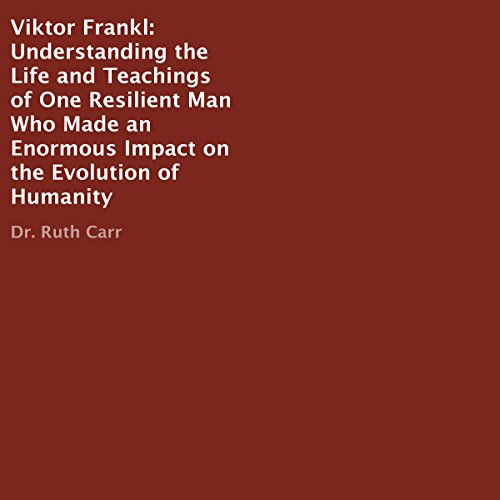 By: Dr. Ruth Carr
Narrated by: Robert Diepenbrock
Try for $0.00

Discover the Life and Teachings of Viktor Frankl Today!

If you have ever seen the movie, The Sound of Music, you would know that indeed, "The hills are alive...." in Austria. Austria is a beautiful country with a rich and vibrant history. Many famous people have come from the hills of Austria including, but not limited to: Marie Antoinette (Queen of France), Ingeborg Bachmann (author/poet), Ludwig von Beethoven (composer), Johannes Brahms (composer), Anton Bruckner (composer), and Viktor Frankl (neurologist/psychologist). Austria has been known as a country full of artists, musicians, and great thinkers such as Albert Einstien as well. Yet, during the middle of the 20th century, it was seen as a place that a minority group of people had ruined. One man, however, would always hold the Austria he knew in his heart forever. That man is Viktor Frankl.

Many view Viktor Frankl as a hero, in regard to his theories and logotherapy. Essentially, his teachings are the source of "self-improvement". He was the first life coach. Heroes such as Frankl evolve silently, but make a huge impact on the world that ripples throughout the ages. Once those individuals are gone from this plane of existence, the world is forever changed. Humanity is not the same.

Viktor Frankl was not only the professor of Neurology and Psychiatry, he was also the author of an astounding 32 books - one of which is rated to be among the top 10 most influential books in the United States of America by the Library of Congress. In addition to his brilliance, Viktor Frankl has an uncontested ability to carry his readers with him in such a manner that the reader feels as if he or she were almost at the concentration camp with him....

What listeners say about Viktor Frankl