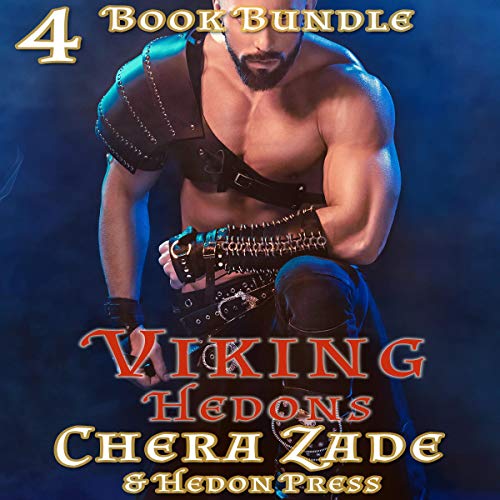 Four Viking warriors are ready to ravage. They took me captive, but one kiss from Brand, and I'm conquered. He calls me his treasure, and I know he's not willing to let any treasure go.

But Viking lords share the treasure of conquest with their men. To them, I'm a rare beauty, something I never was back home. He promises no matter how much I enjoy their ravishing, I'll always be his.

Inexperienced and as nervous as I am, I've always wanted adventure. Now, I've got far more than I can handle.

I can't stay and be married to some lifeless dolt. I need passion and adventure. So I set off from my barren island home to meet the Viking berserkers.

I interrupt their warrior's ceremony, and if I want to leave my home, I need to make amends. They need to take me raw and unprotected. All of them.

I am not experienced, but my innocent body tells me to surrender. These muscled, ravenous men will give me pleasure like I never thought possible, and all I'll have to do is bend my knees.

The Vikings missed the ceremony, but they didn't miss the best part - the consummation.

An army of Vikings take my new husband's place.

Arranged to marry a hateful man, I'm saved by the raiding Vikings. To show they've conquered us, their leader claims me as his prized. But if I thought that was all they wanted, I was naive. They share their plunder.

The Vikings don't believe in sin like I do. They tear off my wedding dress. Already consumed by lust, already too late to take back my offer, I allow them to ravage me on the head table. They aren't going to be satisfied until they finish, each and every last one of them, inside me.

Determined to make a name for himself, the fearsome and merciless Norseman Ragnor of Lejre leads ruthless raiding parties up and down the English coast, terrorizing the Anglo-Saxon inhabitants of the kingdom. But when he "rescues" a beautiful young woman from one of those vile nunneries with the view of making her his slave, he may have gotten more than for which he bargained....

Involuntarily sequestered in a convent, young Lady Elizabeth of Alnwick has spent the last five years of her life in forced silence and solitude in a Northumbrian priory. But when the abbey is attacked by Vikings and she is taken captive by their ferocious leader, her life is thrown off course. Her captor will open her eyes, and her legs, exposing her to a world of sensual joys her innocence could not comprehend....

Fearing for her life, Elizabeth must fight to guard her vow of chastity while being kept in Ragnor's tent, surrounded by bloodthirsty Viking warriors loyal to their leader and eager to share in his spoils of war.

This was a pretty good 4-book bundle. Each one is about different Vikings such as warriors, berserkers, etc. Some of the stories were reverse harem. Ruby Rivers did a good job with the narration. I received this free copy audiobook at my request and have voluntarily left this review.

These Vikings mean business when they go after a woman! Sexy as you can get!
Ruby Rivers is a wonderful narrator! She has all of the sounds that take you to each character!