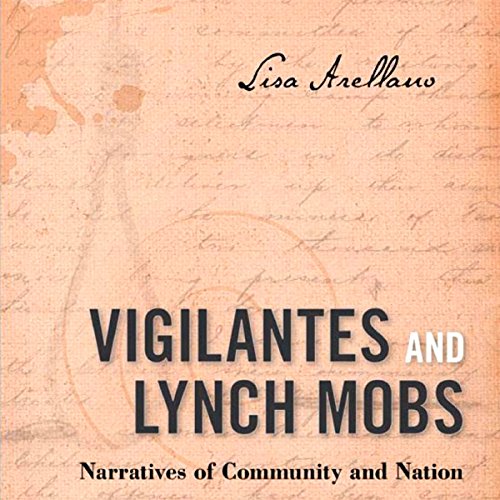 By: Lisa Arellano
Narrated by: Caroline Miller
Try for $0.00

Looking at the narrative accounts of mob violence produced by vigilantes and/or their advocates as "official" histories, Lisa Arellano shows how these non-fiction narratives conform to a common formula whose purpose is to legitimate frontier justice and lynching. In Vigilantes and Lynch Mobs, Arellano closely examines such narratives as well as the work of western historian and archivist Hubert Howe Bancroft, who was sympathetic to them and that of Ida B. Wells, who wrote in fierce opposition to lynching. Tracing the creation, maintenance, and circulation of dominant, alternative, and oppositional vigilante stories from the 19th century frontier through the Jim Crow South, she casts new light on the role of narrative in creating a knowable past. Demonstrating how these histories ennoble the actions of mobs and render their leaders and members as heroes, Arellano presents a persuasive account of lynching's power to create the conditions favourable to its own existence.

What listeners say about Vigilantes and Lynch Mobs

"Vigilantes and Lynch Mobs" was an interesting look at the people and actions that required some type of law and order during the western migration. From the Montana mining towns and horse thieves to early settlements the Official Vigilante History was formed. Kill or be killed. It stated that self preservation was the first law of nature.

From vigilantism to Jim Crow south this audiobook covers the people and history involved, such as works from Thomas Dimsdale, Hubert Howe Bancroft, and Ida B.Wells. Although this was a very detailed and technical book, it was very informative and educational.

For anyone who's interested in history and the evolution of vigilantism and frontier justice then I would definitely recommend this audiobook to you.

About the narrator: Caroline Miller did an exceptional job narrating this audiobook. Her voice is very clear, fresh, and nice to listen to. She brought this audiobook to it's full potential. She was a breath of fresh air. Great work!