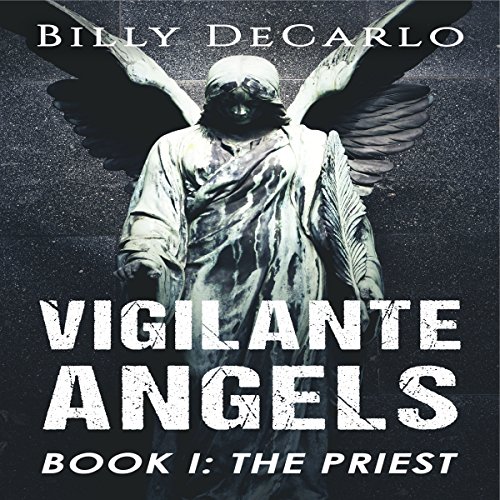 Vigilante Angels Book I: The Priest

If you were going to die, who would you kill?

A hard-nosed former US Marine/retired cop receives a terminal prognosis. But when a local priest is accused of molesting children, he hears the calling of another mission. He enlists a coterie of like-minded patients to seek his own brand of vigilante justice.

Tommy Borata has cancer. He realizes he can kill without consequences, and he’s got a list. A pedophile priest, a corrupt cop, a fascist political candidate—where to start?

The hardest battles, the ones he hadn’t counted on, are right in his own home: an alcoholic, unfaithful wife and bringing himself to accept his son’s sexuality.

In book one of this trilogy, Tommy befriends Moses, a black ex-con. As both seek redemption for their past misdeeds, and with nothing to lose, they set their sights on Father Damien Tarat.

Will his fight against evil and his own internal demons come too close to home?

What listeners say about Vigilante Angels Book I: The Priest

Would you listen to Vigilante Angels Book I: The Priest again? Why?

Yes it is filled with a variety of moral questions that could keep Philosophers very busy.

What was one of the most memorable moments of Vigilante Angels Book I: The Priest?

The moment when our hero begins to seriously believe his plan is possible.

He brings out the various characters and the nuance of the story.

Yes it is a well crafted story.

I enjoy a good vigilante story, right next to a good revenge story. The overall plot was fun and while fairly simple it kept my attention and I made me need to know what was going to happen next. Since this is a quick story in a series it starts off running and never looks back. Perfect for this type of story. This also covers a wide range of topics and almost seemed like a platform for the author to get some of his personal thoughts and ideas out. For a simple vigilante story this really brought lots of thought provoking notions.
I wasn't overly excited about some of the dialogue. I get that this wanted to discuss race issues, as the main character is overcoming his own prejudice, but some of the dialogue just seemed off to me. I don’t mean anything bad, but every now and then things were said in relation to race that I just thought were only said in B movies or in high schools. Don't get me wrong, I enjoyed the banter between the two main characters, it just seemed that every now and then some of the dialogue wasn't realistic and didn't quite fit the person saying it. Can’t say I have much experience with those situations so I could be wrong.
That being said none of the dialogue distracted too much from the story. A few times some of the story felt very real and made me think that these things weren't made up and were based off some true accounts. The whole MO of the priest really creeped me out as I'm sure that it has been used before. Everything down to the drunk wife who they just pretend to not notice, the gay son who is afraid to tell his father, the simple question of did she say she loves me or loved me really were solid plot lines and it was these aspects that really made this a great story.
I've always been an advocate for authors narrating their own books, like singers singing their own songs, I feel I get more out of it. I assume to a degree, an assumption that I can’t back up, that the writing style is similar to how the author naturally speaks so I preferred to hear his tone and cadence for the dialogue. I think his voice fit well for Tommy but wasn't perfect for Moses, even though his tone changed I still heard Tommy talking. That possibly is why I assumed the writing style fit the author's natural speech.
In the end I enjoyed this book and if this is the first published book by DeCarlo I believe they will only get better. I'm looking forward to the next one in this series all ready.
I was voluntarily provided this free review copy audiobook by the author, narrator, or publisher.

Couldn't get into this one...

Vigilante Angels Book One: The Priest by Billy DeCarlo was a tougher listen for me. When I first got it, I downloaded it right away because I really liked the premise of the story. I found Tommy and his quest to eliminate some of the bad characters in society a little, okay, a lot, unbelievable. I mean, a bunch of cancer patients becoming vigilantes? I just couldn't get into it, as it was written. Tommy just seemed like a super pissed off old guy that was dying of cancer.

Billy DeCarlo narrated his own story, and he didn't do that bad, to be honest. It did sound like he was just reading the story and there weren't really and different character voices to differentiate the various people, but it was still an easy listen and I don't think that the narration really took away from the story at all. I was voluntarily provided this free review copy audiobook by the author, narrator, or publisher for an honest review.

Authors should not narrate their stories

The idea of this story is so intriguing that I could not wait to download and listen. I hate to say it but I didn't finish it. I just did not connect with the narration.

The book seemed to be well-written and the motivation for the vigilante was a relatable one. This book deserved to be performed. The author/narrator just read the story. The listen never rose to the performance level that we expect from an audiobook.

I will be more than happy to try this listen again. With a different narrator.

The people I met, during treatment, don't think like that. I know one guy who said he would take his worst enemy with him but in the end he did not. I've read about guys who just gave up and committed suicide but when mortality stares you, in the face, you kind of let go of earthly thoughts. I still liked the book but a little out there.

A Funny and Heartfelt Story

Where does Vigilante Angels Book I: The Priest rank among all the audiobooks you’ve listened to so far?

My favourite character was Tommy. He was a flawed but lovable character. It was wonderful to see his transformation from a cynical and jaded, prejudiced ex-cop to a compassionate man trying his best to redeem himself.

What does Billy DeCarlo bring to the story that you wouldn’t experience if you just read the book?

I like the tough-talking, no BS way he narrated the book. He really brought Tommy to life.

The book was bitter sweet. It made me laugh as much as it made me sad.

Different and a nice idea, Some of the dialogue is a bit corny, maybe a bit Sam Spade.