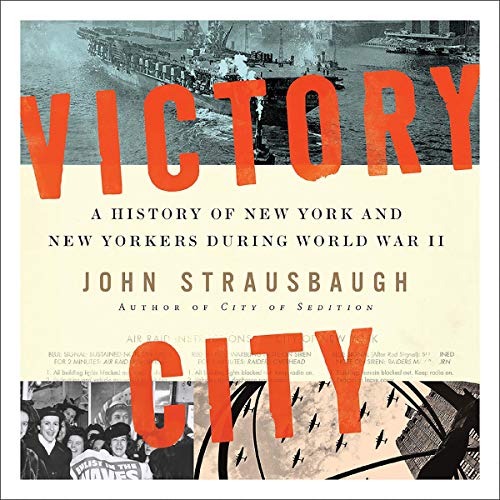 By: John Strausbaugh
Narrated by: Robert Petkoff
Try for $0.00

From John Strausbaugh, author of City of Sedition and The Village, comes the definitive history of Gotham during the World War II era.

New York City during World War II wasn't just a place of servicemen, politicians, heroes, GI Joes, and Rosie the Riveters, but also of quislings and saboteurs; of Nazi, fascist, and communist sympathizers; of war protesters and conscientious objectors; of gangsters and hookers and profiteers; of latchkey kids and bobby-soxers, poets and painters, atomic scientists and atomic spies.

While the war launched and leveled nations, spurred economic growth, and saw the rise and fall of global fascism, New York City would eventually emerge as the new capital of the world. From the Gilded Age to VJ-Day, an array of fascinating New Yorkers rose to fame, from Mayor Fiorello La Guardia to Franklin and Eleanor Roosevelt, Langston Hughes to Joe Louis, to Robert Moses and Joe DiMaggio.

In Victory City, John Strausbaugh returns to tell the story of New York City's war years with the same richness, depth, and nuance he brought to his previous books, City of Sedition and The Village, providing listeners with a groundbreaking new look into the greatest city on earth during the most transformative - and costliest - war in human history.

"With his previous books on Greenwich Village (The Village) and on New York in its paroxysm of copperhead treason during the Civil War (City of Sedition), John Strausbaugh has been taking a position as New York City's best biographer with a vengeance. Victory City as a work of scholarship and entertainment is the best victory yet in the series." (William Monahan, Academy Award-winning writer of The Departed and Kingdom of Heaven)

"With vivid characters and much colorful detail, John Strausbaugh's account brilliantly illuminates New York's dynamic role in the Second World War, as well as the ways the war forever changed the city and its people." (Philip Dray, award-winning author of The Fair Chase: The Epic Story of Hunting in America)

What listeners say about Victory City

Interesting and informative, just the research piece I needed for a writing project.
The rather dull narration is easily overcome by accelerating the playback speed.

Exactly what i was looking for.

It proclaimed to give a sweeping and informative diatribe of the war years in Gotham and it did just that while walking tenuous tight rope of informative and entertaining without so much as a wobble. 2 thumbs up

The narrator's pronunciation of words, leaves a lot to be desired.
W. Averell Harriman is mispronounced; the Groton school as well.
And, if the narrator is American, which it sounds as if he is, he should learn
to pronounce properly the word "integral". These are just three of the problems with
the narration. There are many more.

NYC History Under a Microscope

I confess I am only one-third through this exhaustive, detailed text -- and we have not gotten to World War II yet. Of course the lead up is fascinating, and I am learning much I did not know about my hometown's history, some of it shocking, like the extent of its admiration for Hitler in the 1930s. But one would have to be more of a history buff/nerd than I am to not keep drifting off as the author follows tangential figures I can only hope will later be woven back into the narrative. It's a great book to have in the car for long drives, good for dipping in and out when the right mood strikes.