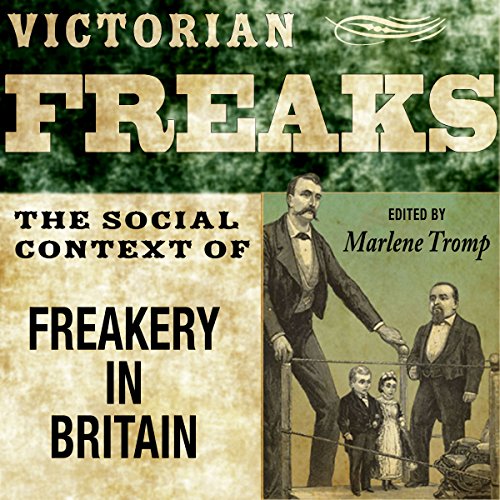 By: Marlene Tromp
Narrated by: Fred Humberstone
Try for $0.00

While "freaks" have captivated our imagination since well before the 19th century, the Victorians flocked to shows featuring dancing dwarves, bearded ladies, "missing links", and six-legged sheep. Indeed, this period has been described by Rosemarie Garland-Thomson as the epoch of "consolidation" for freakery: an era of social change, enormously popular freak shows, and taxonomic frenzy. Victorian Freaks: The Social Context of Freakery in Britain, edited by Marlene Tromp, turns to that rich nexus, examining the struggle over definitions of "freakery" and the unstable and sometimes conflicting ways in which freakery was understood and deployed. As the first study centralizing British culture, this collection discusses figures as varied as Joseph Merrick, "The Elephant Man"; Daniel Lambert, "King of the Fat Men"; Julia Pastrana, "The Bear Woman"; and Laloo, "The Marvellous Indian Boy" and his embedded, parasitic twin. Victorian Freaks contributors examine Victorian culture through the lens of freakery, interpreting the production of the freak against the landscape of capitalist consumption, the medical community, and the politics of empire, sexuality, and art. Collectively, these essays ask how freakery engaged with notions of normalcy and with its Victorian cultural context.

This book is published by The Ohio State University Press.

What listeners say about Victorian Freaks

Great book with the single worst narration ever

The book is absolutely fascinating, and it's nice to have an erudite book on this subject. It consists of a series of scholarly essays on freakery and its relationship to Victorian sensibilities. This is made for an academic audience, so anyone looking for a casual read may be put off; it has the air of a dissertation, but those of us who study the topic will find a wealth of great observations and material.

However, this is the single worst narration I've ever heard in any audio medium. I have no idea what the intent of the narrator was here, but it's my personal theory that although the narrator can accurately read single words, he has no idea what they actually mean or what the sentences say. Seriously, the inflection, tone, pacing, and pronunciation make no sense at all, as if a computer voice were reading a text. It sounds a little more human at 2x speed, but it's still very, very difficult to listen to, and many words are mispronounced. In the span of like three sentences, he pronounces "minotaur" as "meen-OH-tor," "fin de séacle" as "fine day seecle," and, bafflingly, "milieu" as "MEEL-yerr."

I would probably recommend going with a physical book on this one.

This is a fascinating and important book about disability history.

The narrator is so bad it’s almost unlistenable.