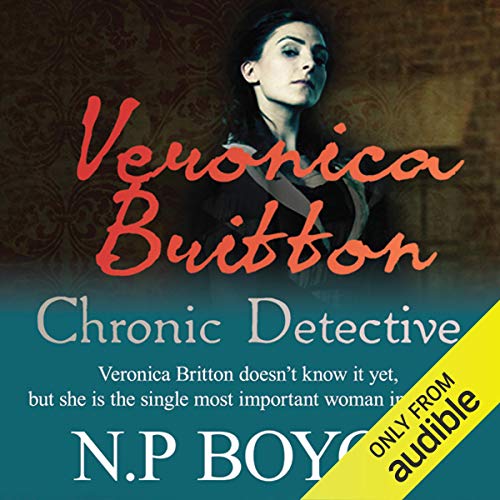 By: Niall Boyce
Narrated by: Clare Corbett
Try for $0.00

Veronica Britton is a Victorian private detective, a specialist in untangling tricky situations that occur in time as well as space. Working alongside her young apprentice Gabrielle Pendleton, she's very much in demand: if a necklace goes missing and you suspect that someone is selling it off in the future as a valuable antique, or you find yourself being blackmailed by someone who knows a little too much about your past, she's your woman.

Smart, efficient and (almost) always discreet, Veronica is the best chronic detective in London. Time travel is an open secret in the city and operates under the supervision of the Ministry, an obscure branch of the British government. Veronica does her best to avoid the Ministry’s agents, but recently they have started to follow her a little too closely. As she navigates the ‘timepools’ of London, Veronica soon uncovers a series of mysteries that are strangely interconnected; a fiendish plot that threatens not just the city, but the whole world. Only by facing up to the secrets of her past can Veronica Britton save the future.

Veronica Britton is steam punk at its best: smart, funny and escapist, with a little something for everyone to enjoy.

What listeners say about Veronica Britton

This isn't a novel but a series of short stories. This also isn't steampunk, but rather a fairly standard time travel/"end-of-the- world as we know it" disaster stories, It was pretty good up until the last story "the Empire" I think that the author was trying to interweave 4-5 plots and about 8 main characters and have everyone telling their part in first person. It didn't work, because the point of view character abruptly changed every few paragraphs (or sometimes every few pages) and it wasn't obvious when this occurred. It was bewildering and gave me a headache. This may have worked better on the written page, but I doubt it.


The narrator wasn't very good. Veronica and Gabby (and all of the other young women) had essentially the same voices as did most of the male characters.

This is serious sci-fi. I was not expecting that. I admit I chose this book because of the narrator. I'd just finished another book she narrated and she did all of the voices so well, I thought I'd see what else she had recorded. I thought this was one I would enjoy. I was really disappointed. It is sci-fi, and not even good sci-fi...

I really enjoyed this book, it bounces about willy-nilly through time with gay abandon while the big picture gradually reveals itself. And what a big picture it is!

When the book ended I was left wanting a couple of questions answered and a sense of wondering if a sequel was possible, I don't know, there was also a strong sense of finality as well.

I was also somewhat in awe of the mind that could conceive such a complex idea and put it on paper. I was reminded a little of The Time Traveller's Wife which is also a stunning concept well written.

The characters are well rounded, likeable and believable. The baddies really quite bad, the goodies are on our side and the idea of how the situations evolve and/or devolve are quite easily understood despite being rather complicated.

Yes this is a good book and if you are reading this its probably worth your while listening to a story about a couple of female detectives who do lots of travelling.

This might be better read and not listened to, which is a shame as the reader is great. The story jumps around so much, and changes ppint of view every other sentence in places, that unless you're paying 100% attention it's super confusing. And it doesn't need to be. It's a fairly good plot and could be a good read if the author hadn't decided to try to be clever with it. The characters are probably good too, but are buried under the jumping around in time.

This is a complicated plot that starts well and engagingly, but in the second half becomes quite difficult to follow as it switches endlessly between different people and timelines. I believe the physical book is structured to support this, but as a listener, you have to wait for the context to tell you with whom, and where in time, you are.

Be aware that almost everything that happens, right from the very start, is connected and contributes to what happens in the second half - that became clear on a second listen. The first few sections (I forget if there are 4 or 5 in total) are gripping, fun stuff, but then the author starts to haul together all the hints and clues he’s strewn around, and things start to get complicated, with people endlessly popping about through time, and an all-seeing, all-knowing cast member who gets absolutely everywhere and is key to almost everything – to say more would spoil things!

There’s a very fine heroine, Ms Britton, and her equally fine side kick Miss Pendleton, and a large cast of supporting characters, including a baddie who almost succeeds in taking over all of time – I think! The more you think analytically around time travel, the more you wonder how anyone can thwart anyone else – all you have to do is keep going back a bit further and changing things. If you change an event that happened in the past, does all the future that resulted from it disappear? Or does that future “option” just get removed? Do we exist singly or in multiple time lines? What is time… good Lord, I’ve come over all philosophical!

Wonderfully read. Clare Corbett reads Ms Britton as exuding a brisk competence, and Miss Pendleton is bright with just a hint of Essex. All the other characters are well inhabited – so well that I’m sure the narration contributed to my hanging on in there when it all seemed a bit impenetrable.

This was an intriguing listen, with a veeeery discrete and rather sweet love story buried in amongst the time travel and derring-do. Something different, and worth a go. Oh, and don't listen when you're hungry - there's much consumption of toast, lovely drenched in butter and marmalade or jam, and endless cups of tea consumed - made me quite hungry at times!

I was really looking forward to this book but after getting more than half way through, I'm going to give up. I just can't stay interested. It's a really interesting premise but the story isn't grabbing me and I just haven't got to know or be concerned about any of the characters...even the cat.

Time Travel with a difference

Have you listened to any of Clare Corbett’s other performances? How does this one compare?

I have listened to one other book that she's narrated.Clare Corbett is a popular & very good narrator

A very difficult book to follow 🤔 in the end I just wanted for it to finish!!