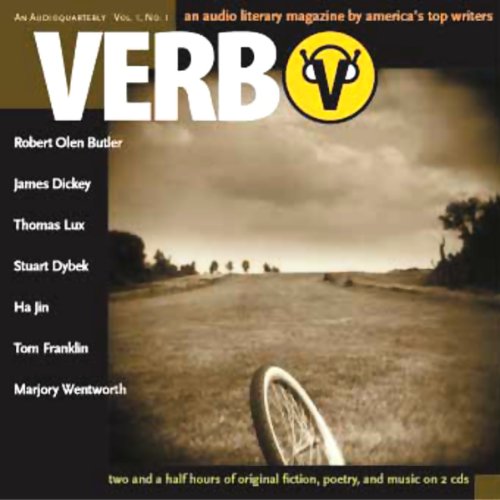 Fiction, poetry, and music come together to create something new: Verb. Original stories and poems you won't find anywhere else, by the best writers in the country, brought to you in an innovative format. Verb is the ancient oral tradition and the venerable literary magazine combined into a fresh new package: the audioquarterly.

Our inaugural issue features many of the top writers in the country. We're proud to include a 13,000 word excerpt from an unpublished novel by Pulitzer Prize-winner Robert Olen Butler and a new recording of the seldom-seen story "In Broad Daylight", by National Book Award-winner Ha Jin. The issue also features an unreleased recording from the late James Dickey, and a new short story from Edgar-winner Tom Franklin. We have the great writer and poet Stuart Dybek making his singing debut and new poetry from Thomas Lux, one of the best poets in the country. Finally, we round it off with six new poems from South Carolina's Poet Laureate, Marjory Wentworth. All of that wrapped up with a ghost from the 19th century, Walt Whitman.

What listeners say about Verb

I received the first issue for my subscription today. I greatly appreciate this excellent method for presenting new poetry and stories. It allows me to participate in them in an intimate way that reading alone does not. I can hear the authentic voice of the poet or storyteller in most cases. Usually the only way to hear this is to attend readings at which the general atmosphere may intrude on the experience. Now I can hear the works in an environment that permits me to fully engage with the work. I can hear the author reading in the rhythms that the work demands. Thank goodness that Verb does not present actors reading. The added dramatic approach is so often completely insensitive to the rhythms of the work.

This is a wonderful approach.

I give this book and it's sequel Vol.1, No. 2, my highest recommendation. The writing is by turns fresh, funny, serious, and whimsical. There is a great deal of variety, and the material is poetic, lyrical and literary. It is this kind of work that got me hooked on audible, along with the wonderful but now defunct (temporarily?) show "Earshot" (formerly "Ear to the Ground"). When I listen to Verb, I get the sense of sitting around a campfire hearing stories, maybe after a day of herding cattle, or maybe we're just a bunch of boyscouts on a camping trip. I get the sense of hanging out with Steinbeck having a couple of beers, or maybe swapping stories with Shelby Foote or Seamus Heaney. Perhaps I'm comparing former girlfriend stories with Updike. I am eagerly awaiting more of this kind of material and if you read this, I hope I've turned you on to something sharp!