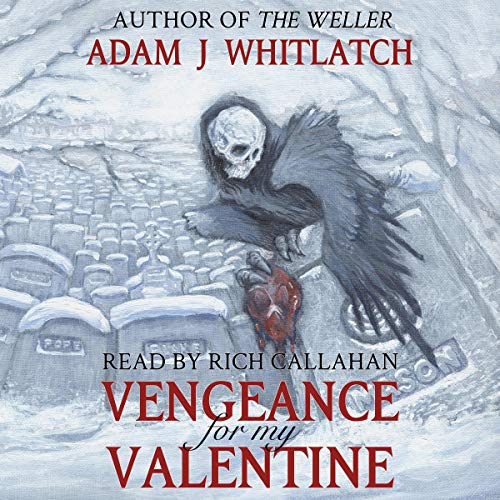 Vengeance for My Valentine (Five Seasons of Night)

By: Adam J. Whitlatch
Narrated by: Rich Callahan
Try for $0.00

When his fiancée is brutally murdered on Valentine's Day, Ash Corvus is unwittingly plunged into the nightmarish world of the Arpadeem, or, as the movies call them...Vampires.

What begins as a personal quest for revenge becomes a struggle for the fate of the city itself as Ash's search takes him into Cedar Rapids' secret criminal underworld. Ash must cast off his humanity and become a monster himself if he hopes to bring vengeance upon the monster who murdered his love...the man with the scar.

This was a very well done story. The character development was on point. There was just the right amount of detail to the back story for each person. The details of the settings were in-depth, but not over the top. It was perfectly balanced. The pace was even, so as the reader you feel at ease to enjoy the story. I absolutely loved it. The build up to the climax was awesome. Each step fell together in stride, so your anticipation stays consistent. So overall, just a wonderful and fantastic book. I'm definitely looking forward to the future adventures of Ash Corvius.

This was my first experience with an audiobook. I prefer reading over listening to someone else read. I plan to buy more from this author, but in paper form. If you're an audiobook person, BUY THIS AUDIOBOOK. If you're like me and you want to flip pages, BUY THIS BOOK. It's well written and the author really paints a picture of what he's describing.

Every second was a new experience. You can feel the characters passion and drive. I would love to see this as a movie.

Not what I was expecting!

This is definatly a different spin on your typical vampire story. It was a really vivid and descriptive prose. I'm intrigued to see where he takes these characters next. Whitlatch has created a unique and sensual take on the vampire legend.

This book had me hooked from the beginning! Well written, engaging story with characters you might not expect. Enough vampire convention with awesome, well thought out twists. The author has done an amazing job. My only thought on the reader is the beginning couple of chapters sounded flat- but after that the enthusiasm picks up and is great to the end.

Welcome to a fairly interesting yet predictable vampire tale. This first volume of the series introduces us to Ash Corvus, lead singer of a local band while working sales at an auto dealership in Cedar Rapids. When his fiancée is murdered by a demented vampire, Ash follows the age-old adage, “If you can’t beat them, join them.” Whitlatch injects some new blood into vampire elements, along with the common tropes, adding freshness to an old standard. I liked it. I was given this free review copy audiobook at my request and have voluntarily left this review.