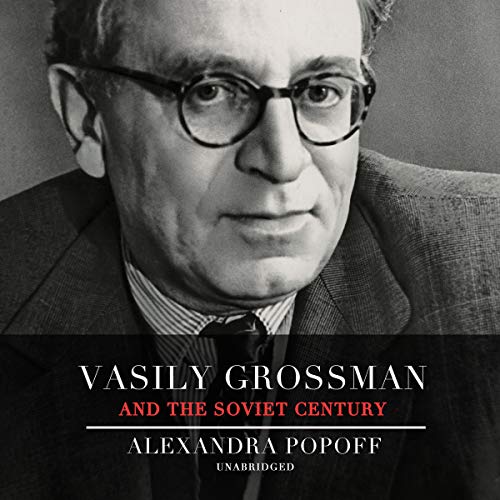 Vasily Grossman and the Soviet Century

By: Alexandra Popoff
Narrated by: Stefan Rudnicki
Try for $0.00

If Vasily Grossman's 1961 masterpiece, Life and Fate, had been published during his lifetime, it would have reached the world together with Pasternak's Doctor Zhivago and before Solzhenitsyn's Gulag. But Life and Fate was seized by the Russian KGB. When it emerged posthumously, decades later, it was recognized as the War and Peace of the 20th century.

Always at the epicenter of events, Grossman (1905-1964) was among the first to describe the Holocaust and the Ukrainian famine. His 1944 article "The Hell of Treblinka" became evidence at the Nuremberg trials. Grossman's powerful anti-totalitarian works liken the Nazis' crimes against humanity with those of Stalin.

We are only now able to examine Grossman's prose, which has the everlasting quality of great art, as well as his life and legacy, which Popoff's authoritative biography illuminates.

What listeners say about Vasily Grossman and the Soviet Century

Popoff finally writes the historical truth other historians dance around though never identifying the two ideologies as isomers of each other. Can’t wait to listen to Life and Fate. I hope Audible produces Grossman’s Stalingrad soon.

Vasily Grossman was a humanist, intellectual, and journalist, essayist, and novelist. He described the Russian soldiers’ experience on the front line at Stalingrad, following the Red Army through the gates of Nazi death camps, battling the Stalinists for the publication of his fiction. Enlightening and engaging, it brings the social, political, economic, intellectual, military, and literary history of the USSR.

To know this history from the perspective of the first person is to read the first person's books. In my opinion, WWII and USSR history starts with William Shirer and Vasily Grossman.

The subject deserves 5 stars, but I felt that the presentation or organization could be improved upon. There was a lot of jumping around between years, back and forth in time. I’m sure it is difficult to avoid this, but it was a bit confusing. The subject itself is extremely important - both the author Grossman and the messages portrayed by him and by his biographer, Popoff. Denial of atrocities, of genocide, of mass murder are all too common, as is the whitewashing of history. But history must be known and acknowledged, if humans are to learn anything about the value of human life and the tragedy of the destruction of human life. I listened to Stalingrad and was impressed that Grossman is probably the best author of the 20th century, and under appreciated. I plan on reading Life and Fate (though I’m holding out for a while in hopes of an unabridged audio version) and I’m glad I listened to this so as to acquire a deeper understanding of the greatness of Grossman’s writing and efforts. Popoff brings us up to current times, and provides the reader with excellent insight into the psyche of the Russian people and their leaders today. Actually, quite a tragic “end”, though I hope the “end” improves.

LEARN From His Life

Vasily Grossman lived a most extraordinary life, in the most tumultuous time of the 20th century. He observed the horrors of the Nazis extermination of the Jews, namely his adored mother, first hand. He witnessed the battle of Stalingrad and was able to communicate to the world what that was like for those under Stalin's brutal communism. To ill-informed westerners of today who love the idea of flirting with communism, Grossman observed that the battle of Stalingrad was FREEDOM for those who were there. That in itself should be a wake up call to what true fascism is. Grossman equated Nazism with Communism in that they are mirror images of each other. His book was actually arrested at one point! Take heed America in 2020 what this acclaimed author had to say in his lifetime.

Stefan Rudnicki's narration is spectacular. He does Russian works so well. BRAVO!!!

It was a fascinating and humbling experience, to listen to the dignity, lucidity, humanity and courage of a man whose people faced unimaginable and unremitting hardship, terror and repression.
Vasily Grossman's indomitable will to bear witness to his time, puts him alongside Primo Levi and Elie Wiesel.

Bearing in mind the story of this fascinating book, did Blackwood Publishing's sound editor belong to the Soviet apparatchiki who did so much to prevent Vassily Grossman's work from being seen? The sound editing made me furious. Or was the reader a computer generated voice? By not giving a moment's space between chapters, or even sentences, it was often difficult to make sense of the text. The reader has a huge responsibility to the author and the text and I felt this sloppiness in the editing process was an insult.
Bearing this is mind, and having persevered with a bad listening experience (but the authentic russian voice was great) this is a wonderful and illuminating book to prepare for reading Life and Fate and Stalingrad. I would recommend people to complain to Audible or re edit the sound. Or just read it as a book......

Difficult to cover all topics in this narrative.

I would have liked to hear more about the internal passport system and Labour conditions. Not just for the ten per cent passing through the penalty system but for the others...ordinary workers