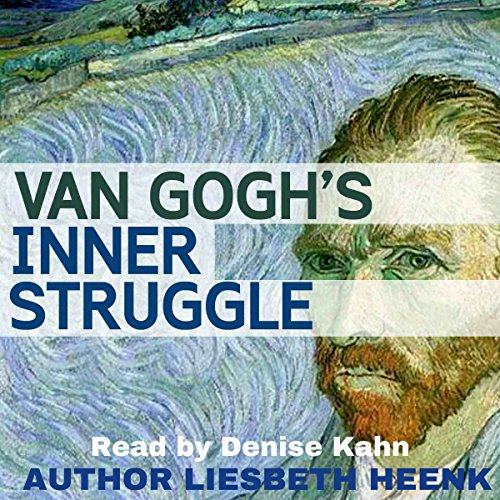 By: Liesbeth Heenk
Narrated by: Denise Kahn
Try for $0.00

A fascinating look into the life of a tortured genius.

Using Van Gogh's letters as a primary source, the author discusses the artist's life, his approach to his work, and his mental illness. The letters vividly show the artist's life was no bed of roses. Whereas Van Gogh perfectly knew what was sellable, he continued to produce what he considered as honest, truthful art, regardless of current taste. He did not expect the art-buying public to understand the rough appearance of his work. Van Gogh acknowledged that being an artist simply involved struggle, but he believed that one would benefit from adversity, both personally and professionally.

"No victory without a battle, no battle without suffering."

In Van Gogh's case, it seems to have been a never-ending battle against poverty, isolation, and adversity. Given his circumstances - being financially dependent upon his brother Theo, not selling any work, and getting minimal recognition - his achievements are utterly amazing.

The Secrets of Van Gogh series:

Pleasantly surprised by this listen . . .

Although I am not an art aficionado, Having visited the Van Gogh museum in Amsterdam several years ago I've maintained a passing interest in the artist and his work. When I came across this title it piqued my interest but, to be perfectly honest, I did not think I would be overly impressed listening letters the artist wrote about his life. However, I was genuinely surprised by how interesting this entire (albeit short) work was. By using Han Gogh's own letters, the author truly gave Vincent a voice in trying to reveal to the listener the his navigating that fine line between genius and madman. The narration by Denise Kahn is nothing short of magnificent. The consistency of voice, combined with the passionate feel for the topic draws the listener right in, even to the point where one can almost imagine Vincent sitting across the table chatting as opposed to letter writing.

In short, I would highly recommend this listen to anyone that enjoys the world of the artist as well as anyone looking for a model of how audio books based on letters and/or journal entries should be presented. Well worth the time and credit. In fact, I am hoping (petitioning?) the author/narrator combo to begin work on the other 4 books in the "Secrets of Van Gogh" series. A review copy of this audiobook was provided by the author, narrator, or publisher at no cost in return for this unbiased review. If you found this review helpful, please take a moment to click yes below.

What a fascinating read/listen...

This audiobook is a great read. I had a lot of fun when listening to the life story of Vincent van Gogh. The book consists of Van Gogh's correspondence - which really allows an in depth look at Van Gogh:s life and provides a very personal account . Very interesting indeed and highly recommended.

Van Gogh did not want his letters shared, by the way. But without that such a great first hand account would hardly be possible. Personally I found his view that struggling is inherent to being an artist and that one can benefit from adversity most interesting.

Also, I love how Denise Kahn narrates the story of Vincent van Gogh - I like her voice a lot and she really brings the story to life :-)

This actually had a lot of very interesting information and I found the content to be enjoyable. Its a little monotonous and I found it best to listen to in sections because it can get a little boring if its not a subject your actually interested in. It was fun to see the inside of such an incredible mind though.

Van Gogh as I never knew he existed

I grew up appreciating Van Gogh's art work but I didn't really know much about his life beyond the supposed cutting of his ear to mail to a lost love. I will definitely need to listen to the follow up books as he was an immensely interesting yet tragic character. I was given this audio book complimentary in exchange for an honest review.

A look into Van gogh’s personal life and struggles with mental health through excerpts of his own personal letters. It was very interesting to learn more about the artist in his own words as well as what was going on in his life at the time they were written. Very good narrative, I will be listening to the rest of the Secrets of Van Gogh series. Only drawback was that the audio sounded a bit tinny.

Socially inept, Can Gogh failed in his earlier employment and it wasn't until a suggestion that he tried his hand at draughtsmanship that, supported financially by his brother, Theo, he found his calling as an artist. But throughout his life he suffered physical disability and mental instabilities including terrible nightmares, seizures, melancholy and remorse.

Using quotations from Van Gogh's own letters, author Lisbeth Heenk, a Dutch art historian, let's the artist speak for himself through them. She writes sympathetically and without artistic jargon, a!lowing his own thoughts and fears to shine through.
Denise Kahn reads clearly, matching the text in clarity and simplicity, differentiating the voice of Van Gogh from that of Ms.Keen

An excellent book, succinct but packed with information to better understand the man behind the masterpieces. My sincere thanks to the rights holder who freely gifted me a complimentary copy of Van Gogh's Inner Struggle, via FAFY, at my request.


This is Part 2 of a 5 part series of narratives about the life of Van Gough. This booklet is only 48 pages long, so I'm wondering why they were even separated and not published as an entire book. There is also cross referencing from this volume into others, which is meaningless if you only have the one. Only this one appears to be available as an audiobook, which is how I came across it.

I listened to this last summer, around the time that I visited the Van Gough Interactive Exhibition in Genoa. For some reason I never wrote the review at that time, so I just listened to half of it again to remind myself. Obviously I was in the right frame of mind last year as I gave it 4*, on a re-listen I found it rather dry and treatise-like, but I will stick with my original grading.

Van Gough is a fascinating character. He created artwork that has transcended the test of time, yet he only sold one painting during his life. As we are informed, he was aware of the type of art that would sell, yet he chose to go against the grain. If it weren't for the many letters he wrote at the time, we would presumably know a great deal less about this fascinating man. We think that depression and anxiety is a modern affliction, but Van Gough obviously suffered too.

This audiobook quotes many of the artist's original letters and several of the responses he received. Although I found it a bit dry, this is the most accurate source of insider information and the author is undoubtedly an expert on the subject.
The narrator, Denise Kahn, spoke clearly, in somewhat of a slow monotone, but I had no problem understanding her.
1 like