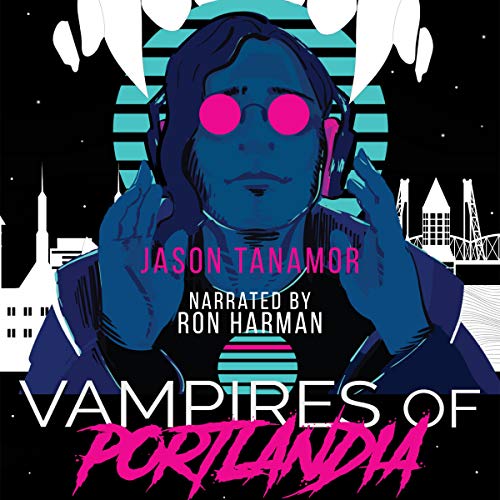 By: Jason Tanamor
Narrated by: Ron Harman
Try for $0.00

When Marcella Leones relocates her family of aswang vampires from the Philippines to Portland, Oregon, she raises her grandchildren under strict rules so humans will not expose them. Her only wish is to give them a peaceful life, far away from the hunters and the Filipino government that attempted to exterminate them.

Before she dies, she passes on the power to her eldest grandchild, Percival. He vows to uphold the rules set forth by Leones, allowing his family to roam freely without notice. After all, they are aswangs.

However, when the aswang covenant is broken, the murder rate in Portland rises drastically. Who is behind the murders? And who is behind the broken covenant? Along with sensei Penelope Jane, Percival must find the truth.

It's then they discover that there are other breeds of aswangs - werebeasts, witches, ghouls, and viscera - that have been residing in Portland for years.

Based on Filipino folklore (aswang), Vampires of Portlandia is a fantastical tale of different monsters coexisting in the weirdest city in America.

Listen if you like the Twilight Saga, the television show Grimm, and The Lost Boys.

What listeners say about Vampires of Portlandia

Took me while to get to like this book.

First off, english is not my main language, so please forgive any misspelling in this review. The story of the book is at most good. It's slowpaced so i haven't found a need to stop to understand anything, other than the odd cultural-philipino word. The premisse of the book is interesting, but could be so much more.

Portland is aparently a small town where a lot of creepy/wierd people gather around. And a good part of it's community is supernatural. Ranging from werebeasts to vampires, not your basic overpowered vampire, a more humanized and mortal form that's trying to actively be part of a human society using little to no powers (that's apperently true for the entire supernatural community). Is it a good story? Yes, it's slow paced though. So don't expect some ground breaking action or incredbly intricate romance (there is some, that for me, was actually what actually made me enjoy the book).

But I actually had to try to enjoy and to keep listeneing to the Vampires of Portlandia, the story take so long to develop and there is little to no description of places, concept of time and very few character portrait. And even so, it takes over half the book on a worldbuilding, don't get me wrong I liked that. But it's just too slow, six hours into the book and then the actual story starts. Characters show little to no development, the "angst teen" is most of the time extremely calm and thoughtfull. Half way into the book the "covenant is broken", so a war seems about to break. And yet, even the ones that should be most scared of it, seems to be so passive and basically no action is taken. Is it still worth it? Yeah, kinda.

Narration wise, it's what actually kept me going. I believe there could be some more dramatization on the voice acting but that's just personal preference. There were very few times that my immersion was broken by it. I do think the narrition will be the make or break for this book for most people, personally is what kept me going for the first hour because of how wierdly writen is it.

Took me a while to realise, but the slowness of the book could be intentional as to try and place us into the minds of the day to day of the vampires. If it's not, then the book can have an abridged version and that'd make it WAY better. If it is intentional, however, I beleive the lack of personality on most characters took a tool on the story and they could have been fleshed out with a few more details here and there, especially about their feelings (since it does try, but just skim over them).

I digress, I'm not a writer just a listener. The book is good, not great or a masterpiece, there is just something missing. Something that actually kept me anxious to listen to more and more. Same as most of it's cast, the book lacks personality.

Do i still recommend it? Absolutely yes. It's a simple long book. Not for everyone, but I actually enjoyed it.

really wanted to like and support this, but had to drop it just ten minutes in. the writing is clunky and the narrator's pinoy accent is terrible--no idea what immigrant community it's supposed to represent, but it sure as hell doesn't sound like a filipina lola (narrator even says it american-style, "low-lah").

A contemporary vampire story of love and family

This is the story of Percival, a young vampire, and his adoptive family; one that decided centuries ago to stop killing and try to merge into society.

The story was entertaining and had some funny remarks. The grandma, Leones, was a wise vampire who, as normally happens, kept the family together. When she dies, she passes her powers onto Percival, an adopted vampire. The whole family moved to Portland after having to fly from the Phillipines, given that the government exiled vampires from the country. It tells their everyday life until they find out someone from the supernatural community has been killing people and the public is blaming them, so they find themselves entangled in a series of problems and persecutions.

I liked the general plot, but felt it was missing a lot of background information, which would have made this deep and much more interesting. The same thing happend with the characters; they made sense, but we needed much more information from some of them so they could be relatable.

Although I loved how it focused on family and love and I thought the writing style made this book easy to read and mostly entertaining. The only thing I found funny was when Percival was called "the young adult", which made me feel like told to an elderly.

The narrator did a good job, allowing the listener to clearly differenciate each character.

The ending was cute and more focused on love and hope, which I actually liked.

An interesting take on Vampires

This was a fun listen.
It explores some pretty heavy themes like ethnic identity, immigration, and even genocide.
I'm excited to learn more about the rich Philipino folklore it explores as well.

Would love to see a follow-up set against the backdrop of Covid and the activism that seemed to dominate Portland in 2020.

I received a free copy for an unbiased review of this audio book.