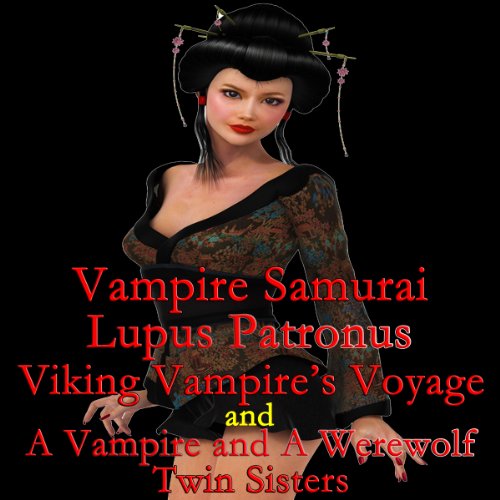 By: Vianka Van Bokkem
Narrated by: Ginny You
Free with a 30-day trial

"Vampire Samurai: My Sword and Fangs"

My father's name is Naoko Kasai. He is a handsome, brave, wealthy Samurai from the island of Tochigi, Japan. When he married my mother they wanted to have children right away. My father wanted the baby to be a boy to teach him how to be a Samurai, and fight side by side. Destiny intervened and a girl was born. My mother named me Aiko. A few days before I turned 11 years old, my father asked me what I wanted for my birthday. Without hesitation I told him that I wanted a sword. I earned my Samurai Status when I was 18 years old. Unfortunately, something terrible happened to me and my cousin Kiku when we went on vacation to Romania. Mongols and Turks invaded Japan and I am going to fight them to the death. A mysterious good-looking vampire named Xander Van Buren is going to try to win my love - if Akemi Naito my fiancé allows it.

I was found by a river one full moon night inside a wooden basket when I was 2 months old. According to the old couple who found me, I was wearing a leather necklace with a large wolf's tooth attached to it. The name Amelia was engraved in it. I am 17 years old and a horrible curse will manifest on my 18th birthday. Without knowing, I am part of a werewolves-and-vampires prophecy. A good-looking werewolf named Alek will win my love. Unfortunately, my love for him will be tested by his dark side.

The snow this winter is so deep that humans are not traveling as usual with their dog sleds. I have not had blood in a few days and I am feeling weak. Suddenly I smelled human blood. I spotted two humans from a distance. Fresh blood was slowly dripping on the white snow. They probably had an accident and were lost. My immortal life gets complicated when a good-looking 19-year-old Viking vampire named Mikael asked for my help. During our sea voyage to free Norway from English vampires, I started having feelings towards Mikael's 18-year-old brother, Noak. My name is Klara and I am a Viking Vampire.

"A Vampire and A Werewolf Twin Sisters"

My father and mother were famous, wealthy, American Biochemistry Physicists. My name is Audrey and my twin sister's name is Audra. My sister and I were kidnapped when we were two years old. The kidnappers sold me to a vampire couple; Audra was sold to a pair of human spouses. Our new families gave us different names. When I was a teenager my adoptive parents turned me into a vampire. When I learned the truth about my origins I started looking for my twin sister. When I found her I discovered that she was turned into a werewolf, and her adoptive parents didn't know. Will handsome teenagers Preston and Lion Spirit accept us with our curse? What happened to our parents? Will Audra and I bond while fighting vampire mercenaries?

What listeners say about Vampire Samurai, Lupus Patronus, Viking Vampire's Voyage, and A Vampire and A Werewolf Twin Sisters