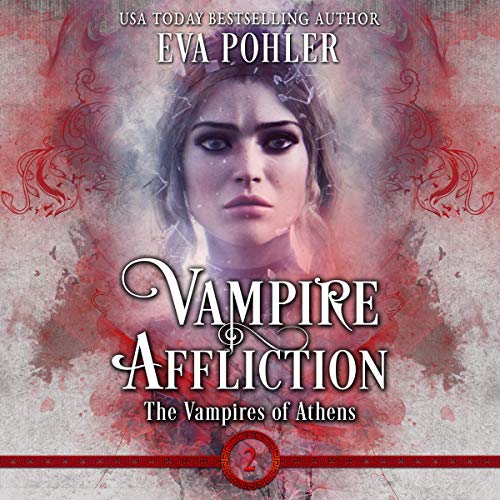 By: Eva Pohler
Narrated by: Racquel Armandpour
Try for $0.00

The vampires want liberty at any cost. The demigods want to protect the city.

Gertie has found herself an unwitting member of a vampire uprising, even though her heart is being pulled by its enemy, Hector.

But how could she possibly leave Jeno, who needs her now more than ever? The vampires have been oppressed for centuries in caves beneath the acropolis without economic resources. They've been wronged, and Gertie wants to help to liberate them.

But the vampires want liberty at any cost - even human life. Can Gertie go along with that?

What listeners say about Vampire Affliction

One of a kind, with a big surprise at end!

OMG! I think this author is trying to kill me! This was so good! There was a big surprise at the end. And of course, a small cliffhanger but it was in a good spot. And it was so good, who’s counting as long as I have the next one RIGHT NOW lol. I have gotten so close to these characters. Some I love to hate and was happy about some things, which I’m dying to tell. I am torn between Jeno and Hector. And will Gertie ever be human again? The whole mythology with the gods is amazing. I love how it’s woven all throughout the book. We meet a lot of the gods in this one. I really liked the snake and how the S’s were hisses lol. Gertie seem to not so much go back and forth with the two guys but tries to consider their feelings equally. They are all three together throughout the book trying to save the vampires and just keep an uprise from happening. We even get to visit Hades in the underworld. If you haven’t read or listened to the first book, I suggest beginning there or you will be lost.

The narrator was ok. She’s perfect at telling the story but not very good at the voices, especially the male ones. Most sound the same and mechanical like a computer. It sort of takes me from the story at times but not too bad. I think she did better in this book than the first. She does have a pleasant sounding voice though. The book is so good, I highly recommend it and the audiobook.

can not wait for recording to finish I was told book 3 is going to be out on audio not until summer but at least it will be right 🥰💕💕!