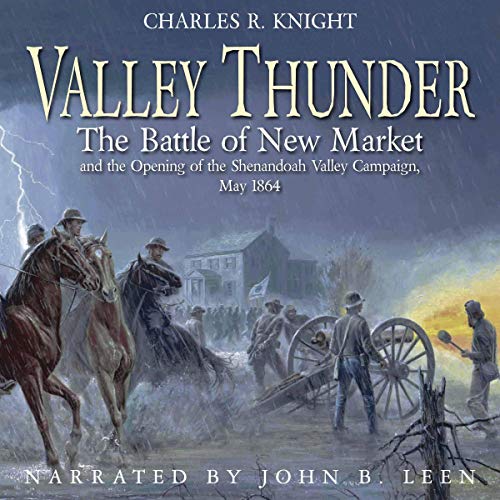 Valley Thunder is the first full-length account in more than three decades to examine the combat at New Market on May 15, 1864 - the battle that opened the pivotal 1864 Shenandoah Valley Campaign.

Lt. Gen. Ulysses S. Grant, who set in motion the wide-ranging operation to subjugate the South in 1864, intended to attack the Confederacy on multiple fronts so it could no longer “take advantage of interior lines". One of the keys to success in the Eastern Theater was control of the Shenandoah Valley, a strategically important and agriculturally abundant region that helped feed Gen. Robert E. Lee’s Army of Northern Virginia. Grant tasked Maj. Gen. Franz Sigel, a German immigrant with a mixed fighting record, and a motley collection of units numbering some 10,000 men to clear the Valley and threaten Lee’s left flank. Opposing Sigel was John C. Breckinridge, a former vice president. Included within the ranks of his 4,500-man army were cadets from the Virginia Military Institute under the direction of VMI Commandant of Cadets Lt. Col. Scott Ship, who had marched eighty miles in just four days to fight Sigel.

When the two armies faced, Breckinridge boldly announced, “I shall advance on him. We can attack and whip them here and we will do it!” As the general rode by the cadets he shouted, “Gentlemen, I trust I will not need your services today; but if I do, I know you will do your duty”.

The Confederate victory drove Union forces from the Valley, but they would return, reinforced and under new leadership, within a month. Before being repulsed, these Federals would march over the field at New Market and capture Staunton, burn VMI in Lexington (partly in retaliation for the cadets’ participation at New Market), and very nearly capture Lynchburg. Operations in the Valley on a much larger scale that summer would permanently sweep the Confederates from the “Bread Basket of the Confederacy".

Valley Thunder: The Battle of New Market is based upon years of primary research and a firsthand appreciation of the battlefield terrain. Knight’s balanced and objective approach includes a detailed examination of the complex prelude leading up to the day of battle. His entertaining prose introduces a new generation of readers to a wide array of soldiers, civilians, and politicians who found themselves swept up in one of the war’s most gripping engagements.

Charles R. Knight is a native of Richmond, Virginia. He is a former historical interpreter at New Market Battlefield State Historical Park, and currently serves as the curator of the Douglas MacArthur Memorial. Charlie has written articles for various Civil War and railroad publications, including Blue & Gray, Classic Trains, and NRHS Bulletin. He lives in Norfolk, Virginia, with his wife and son.

What listeners say about Valley Thunder: The Battle of New Market