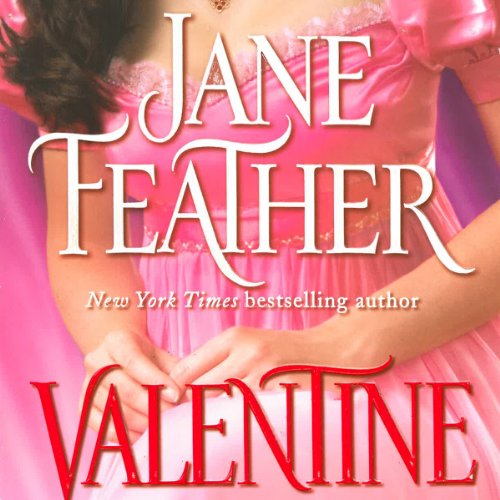 By: Jane Feather
Narrated by: Gemma Dawson
Try for $0.00

A quirk of fate has made Sylvester Gilbraith the heir of his sworn enemy, the earl of Stoneridge. But there’s a catch: To claim his inheritance, he has to marry one of the earl’s four granddaughters. The magnetically handsome nobleman has no choice but to comply with the terms of the will, yet when he descends on Stoneridge Manor prepared to charm his way into a fortune, he finds that the lady who intrigues him most has no intention of becoming his bride. Maddeningly beautiful and utterly impossible, Theodora Belmont refuses to admit to the chemistry between them, even when she’s passionately locked in his embrace. But soon the day will come when the raven-haired vixen will give anything to be Sylvester’s bride - and risk everything to defend his honor . . . and his life.

What listeners say about Valentine

This review is for all of the JF books I have listened to. I have mostly enjoyed them if one is able to get pass the politically incorrect sentiments and behavior of the male characters. Most of her plots involve deception practiced by one party (generally the hero) in order to manipulate the other (generally the heroine). The underhanded behavior goes on for a long time (400 pages in most cases because JF books are long) and the final denouement maybe somewhat anti-climatic since the injured party after an initial period of anger forgives quickly and everything falls into place. A characteristic of JF heroines is that they quickly succumb to the hero’s seduction and to lust despite being resistant in the beginning, abandoning their principles and good sense in rapid order (this behavior bugs me a great deal but, its Romancelandia). Another aspect of many of JF stories is the significant age difference between hero and heroine. In Valentine, the heroine is almost 20 whereas the hero is 35 and each behaves according to their ages. In other stories, the heroine is even younger, as young as 16 or 17. That might be congruent with the times but it still creates some discomfort in this reader. I enjoy those of Ms. Feather’s earlier books not set in the Regency period because they have more historical content; her more recent Regencies suffer from some of the inanity and insipidity that frequently plague recent Regency romances (balls, clothes, social chitchat), without the humor and wit of a Georgette Heyer novel.

Now a word about the narrator. Her V series are all narrated by Gemma Dawson. While not the worst narrator I have come across, she has such a light feminine voice that her vocal range is severely limited. Consequently, her female voices are several registers higher than palatable with the women emerging squeaky, shrill and girly. Her men on the other hand seem to be rolling oranges in their mouths and come across as pompous idiots. In other words, her reading is grating. Another negative in my opinion is that Ms. Dawson tends to over dramatize the dialog making every exchange sound like parlor room high drama or a big joke. She also mispronounces many words and sometimes sort of sing-songs the end of a sentence.

The story is an adaptation of Shakespeare's play and quite a good adaptation. However, clunky mispronouncations detract and distract from the narrative

They keep getting better!!

wonderful performance & another fabulous Feather romance! This novel has all the ingredients a good love story needs to be great: a disadvangtaged hero & a disapointed herione set in 19th century England

Where does Valentine rank among all the audiobooks you’ve listened to so far?

It's not my favorite Jane Feather book in terms of story but it is still a very entertaining listen, surprisingly funny in parts.

What other book might you compare Valentine to and why?

The other books in Jane Feather's 'V' series, all beautifully complex romance stories but with a greater element of history woven in. I read them all years ago and am happy that I can now listen to them.

What does Gemma Dawson bring to the story that you wouldn’t experience if you just read the book?

Gemma brings humor, emotion and life to the story. She is masterful at distinguishing characters (and there are a LOT in this story). I am glad she has narrated all of the V books, I am excited to listen to them all.

The heroine was fabulous, the hero was brilliant and deserving of the title and the plot was just super. LOVED IT!