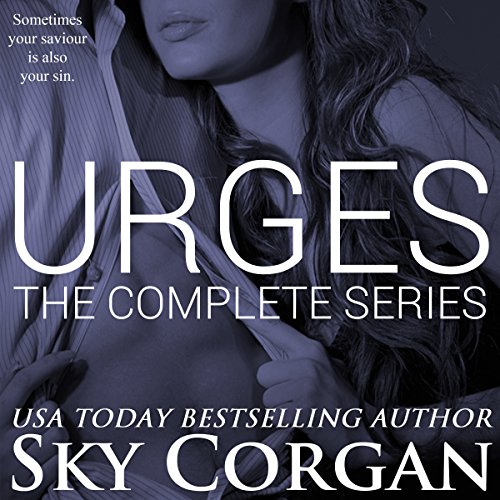 Available together for the first time ever - the complete Urges series, parts one, two, and three.

Part One: Fennel Riegel was looking for a good time. After losing her job and winding up having to move back home, all she wanted was a night to forget herself in the arms of a random hookup. Someone had other plans for her though. When the night goes awry, Fennel finds herself more stressed out than she was before.

Trent Stevens is both the man of Fennel's dreams and her nightmares. He swooped in to rescue her from herself and then disappeared without a trace, leaving Fennel confused and mentally scarred. When he resurfaces to save the day again, she can't figure out if he's good or bad. All she knows is that there's a darkness about him that intrigues her.

Part Two: Trent Stevens has Fennel so turned around that she doesn't know whether she's coming or going. An unexpected tryst in his office has her questioning if their relationship has turned from professional to personal.

When he starts giving her the cold shoulder, it quickly becomes apparent that things aren't what they seem. He plays a dangerous game of push and pull with both her emotions and her body. While he tells her to stay away, his actions speak the opposite.

Fennel's too intrigued to give up on Trent. There's a dark sexiness about him that she's yearned to experience. But when he finally lets her in, what he shows her is far beyond anything she could have imagined.

Part Three: A tumultuous love affair with her boss has left Fennel Riegel feeling completely destroyed. All she wants to do is get away from the man who threw her trust back into her face. Getting away from him is easier said than done though when he seems to be in hot pursuit.

After finding a new job and settling into a place of her own, Fennel thought that life was finally returning to normal. Trent Stevens has other plans though.

I really enjoyed this series. The ending seemed very rushed and I was disappointed not to be able to see the relationship develop. Another book in the series would be nice

FSOG HAS NOTHING ON URGES

OMG FSOG had nothing compared this AMAZING HOTNESS between Business Man Trent and his new employee Fennel.
They first met on these extreme weird circumstances, she has booked to meet a man named Leo at a hotel to JUST have sex which she's desperate for. And when 'Leo' turns up being younger MORE handsome and different & ALL questions, nothing sexual until he pounces on her when he pins her down fully clothed, until he asks is this what she wants and leaves her emotionally not just scared or freeked or but decides to question fits she wasn't tí when the REAL Leo turns up.
When she goes for a desperate job interview she bumps into 'Leo', Trent then starts to wonder DOES she want to work there encase she bumps into him, not knowing he's the big boss until she hits for a 2nd interview and she's offered the job by Trent, whom she had to see & she just CAN'T STOP thinking about him and wanting to do things to him.
They progress until one fantastic but emotional horrid night which makes Fennel leave her job with him as she just CAN NOT stand tí see him again, well that's until he turns up at her new work place a month later and tells her he wants her not just back to work for him but HER, HERSELF. Which he convinces her to go to dinner with him SO HE CAN CONVINCE HER. CAN HE???