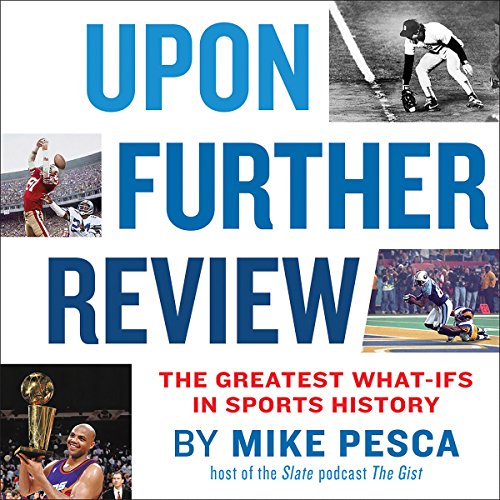 From Mike Pesca, host of the popular Slate podcast The Gist, comes the greatest sports minds imagining how the world would change if a play, trade, injury, or referee's call had just gone the other way.

No announcer ever proclaimed: "Up Rises Frazier!" "Havlicek commits the foul, trying to steal the ball!", or "The Giants Lose the Pennant, The Giants Lose The Pennant!" Such moments are indelibly etched upon the mind of every sports fan. Or rather, they would be, had they happened. Sports are notoriously games of inches, and when we conjure the thought of certain athletes - like Bill Buckner or Scott Norwood - we can't help but apply a mental tape measure to the highlight reels of our minds. Players, coaches, and of course fans, obsess on the play when they ask, "What if?" Upon Further Review is the first audiobook to answer that question.

Upon Further Review is an audiobook of counterfactual sporting scenarios. Inside the listener will hear expertly reported histories, where one small event is flipped on its head, and the resulting ripples are carefully documented, the likes of...

What if the US boycotted Hitler's Olympics?

What if Bucky Dent popped out at the foot of the Green Monster?

What if Drew Bledsoe never got hurt?

Upon Further Review takes classic arguments conducted over pints in a pub and places them in the hands of dozens of writers, athletes, and historians. From turning points that every sports fan rues or celebrates to the forgotten would-be inflection points that defined sports, Upon Further Review answers age-old questions, and settles the score, even if the score bounced off the crossbar.

"What if you didn't read Upon Further Review? You'd miss a lot of mind-blowing fun. But why take the chance? Read it. You'll laugh. You'll learn. You'll impress your friends. There hasn't been a sure winner like this book since Mike Tyson beat Buster Douglas." (Jonathan Eig, author of Ali: A Life and Luckiest Man: The Life and Death of Lou Gehrig)

"This is sports escapism brought to new and entertaining heights." (Kirkus)

"The inevitable plight of sports fans is longing for what might have been. Retrospective analysis - and wistful reimagining - is what gets them through the night. Upon Further Review teems with such moonlit fantastical - and a ravishing counterfactual revelation: sportswriters, the proud and embittered few, are actually a delightful bunch of goofball romantics." (Nicholas Dawidoff, author of The Catcher Was A Spy and Collision Low Crossers)

What listeners say about Upon Further Review

Too much basketball, too political, too left-wing, too East Coast.

Or is that last one redundant?

Widely varying mixed bag, the good is worth it.

There are some amazing stories in this book. Notably the chapter by Jon Bois, and the one written and narrated by Jessie Eisenberg, where he describes a series of events in which he is to blame for everything bad to happen in the 90s. And of course, the one that poses a world in which we pay college athletes, a world I hope becomes non-fiction eventually. The Tug of War chapter is solid as well.

And then there are some overly serious, weirdly racially or gender motivated, virtue signalling chapters, that rapidly become unlistenable. Like the one about altering the slave trade for some reason? Or the extremely dull drone about Title 9.

Overall, you'll know within the first minute or two of a chapter if you want to hear it, and don't hesitate to skip a bad one, because a good one is right around the corner.

A Must For Sports Fans

Sports is all about what ifs, and this is a very entertaining collection of ideas about how things would be different if there were minor, sometimes major, changes.