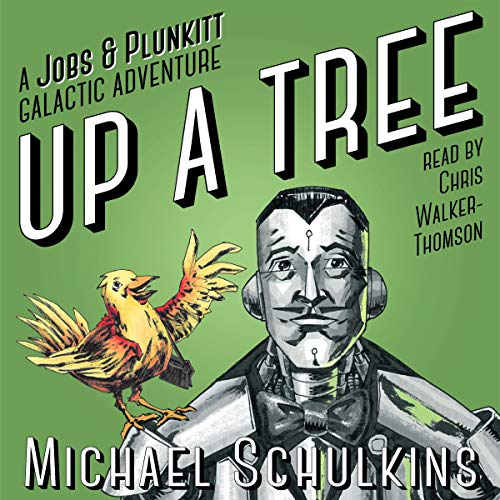 Galactic senator Plunkitt and his faithful iBot butler Jobs warp to the overgrown hot-house Planet Tree, where even the hotel rooms are alive - and possibly trying to consume them. Until today, the termites sanitation union has kept the foliage at bay, but now Plunkitt has accidentally sparked a planet-wide strike, instantly making him the most hated being on Tree. Can Jobs hack through the jungle of sabotage, alien love triangles, and insider trading schemes, not to mention the aggressive undergrowth itself, in time to save his master from the clutches of the Devil's Toilet Bowl? Only Jobs knows, and he finally tells all in Up a Tree.

Jobs and Plunkitt are the Jeeves and Wooster of the 31st century, and their adventures are out of this world. In their debut novel Up a Tree, Jobs serves up a smorgasbord of sci-fi satire suitable for fans of Douglas Adams and Terry Pratchett.

What listeners say about Up a Tree

Where Jobs (Jeeves) is iRobot ( yes, an Apple (tm) product) to galactic Senator Plunket (Wooster), you have well repackaged, beloved characters in a new setting , on a juncket to a all too familiar, plush conference about the heat death of the universe. On a planet named Tree, the termites keep the forest at bay, the birds can't fly due to taxes, and beaver-Americans are the workers.

Didn't see that coming did you? Enjoy.

Prepare to be transported into another universe and laugh out loud doing so! Great read!!!