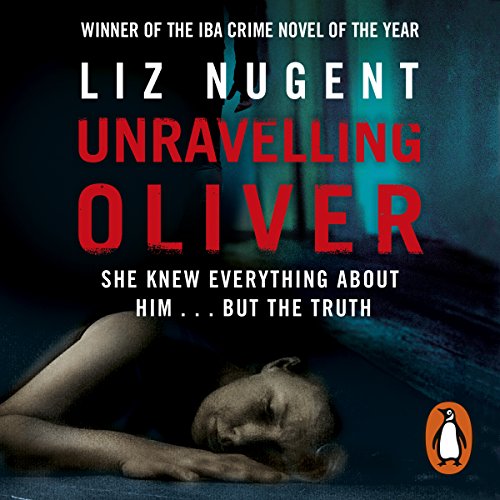 Liz Nugent's gripping audiobook of psychological suspense, Unravelling Oliver, is a complex and elegant study of the making of a sociopath in the tradition of Barbara Vine and Patricia Highsmith.

Oliver Ryan is a handsome and charismatic success story. He lives in the suburbs with his wife, Alice, who illustrates his award-winning children's books and gives him her unstinting devotion. Their life together is one of enviable privilege and ease - enviable until, one evening after supper, Oliver attacks Alice and beats her into a coma. In the aftermath, as everyone tries to make sense of his astonishing act of savagery, Oliver tells his story. So do those whose paths he has crossed over five decades. What unfolds is a story of shame, envy, breathtaking deception and masterful manipulation.

Only Oliver knows the lengths to which he has had to go to get the life to which he felt entitled. But even he is in for a shock when the past catches up with him.

Liz Nugent has worked in Irish film, theatre and television for most of her adult life. She is an award-winning writer of radio and television drama and has written short stories for children and adults.

Unravelling Oliver is her first novel.

"Truly excellent, beautifully written...strongly recommended." (Sophie Hannah)
"Compelling, clever and dark, unlike any other psychological thriller you will have read before...you'll gobble it up in one go." ( Heat Magazine)
"Incredibly brilliant." (Marian Keyes)

What listeners say about Unravelling Oliver

I love Liz Nugent! please could we have more!

Her characters are so dark and narcissistic. couldn't stop listening. Great narration. I give this five stars overall.

Read this book. You won’t regret it. My only critique is that with so many narrators...why not have one with a French accent to read Veronique’s chapters? Otherwise, excellent.

Not for the first time recently I find myself debating what constitutes a thriller.  This one certainly opens with a real punch of an opening line which I won't quote because it is one of the most powerful moments in the book and one of the biggest &quot;signals&quot; towards the gradual unravelling of Oliver.  It's a single sentence that with a jolt takes you from your comfortable listening place into the mind of Oliver.  In those few words I realised that I was in the hands of a talented author. What follows is a classy set of narrators who take us through decades of history before and after that event to gradually disentangle the web of Oliver's life.

It is simply a story and does not moralise or instruct, it merely guides us through a classic question of nature versus nurture.  It's largely very gentle but I found that the structure of the book was very well suited to the larger cast of narrators.  Mostly, and I am no great judge of accents, I felt they gave an authentic glimpse into an Ireland when prejudices against homosexuality and single mothers was considerably more prevalent.  It revealed how Oliver was forged between neglect, constraint and opportunity and where it took him and those he knew.

I don't actually want to write more as this is a fairly brief and mostly gentle &quot;human&quot; tale that I really enjoyed.  The central character is one you will likely develop very strong views about though they will fluctuate because in the final analysis the purpose of the story is to form a judgement on him.  I'd call it engaging, original and very well crafted.  I wouldn't personally call it a &quot;thriller&quot;, more of a &quot;drama&quot; as Nugent's approach to weaving the threads of her story is actually quite subtle in a mesmerising fashion.

Very good, completely different to what I would expect but very enjoyable listen , I wouldn't categorise the book in thrillers but it's interesting enough

I loved this story and was hooked from the off. Emotionally engaging with well thought out characters and plot, highly recommended.

Not &quot;evil&quot; but definitely lacking something

I have bounced between the kindle and the audio version of this book. Yes I enjoyed it but it didn't tick all the boxes for me.

Yes he could manipulate, yes he was a womanizer but I didn't get the whiff of a sociopath in the making which is in the forward for this book. For me he was more of a narcissist. Yes there was deep underlying jealousy towards his blood family but he didn't do anything to them.

The truth behind the story when it emerges is rather clever.

what a great book. thoroughly entertaining. it travels along at a great pace. it develops characters in a sympathetic but not saccharin way. the language used is perfect for the time and place and it evokes great mental pictures. I thoroughly enjoyed the performance as well and would listen to the readers again in a heartbeat.
Great book. (when's the follow up?)

Holds your attention throughout. Oliver is presented as a complex psychological study. My only criticism is the "voice" of Veronique. Why on earth would she have an Irish lily???

Would you listen to Unravelling Oliver again? Why?

Yes, a few years into the future.

I did. I like to listen to audible books whilst doing my artwork, and I had a clear day to enjoy the book and my art. It was a satisfying listen.

I so loved the debut book of Liz Nugent that I ordered and listened to this second novel directly after finishing the first. Sometimes the second book is difficult to live up to the hype of the first but this was even better. The main character in the novel is a very twisted, manipulative and sad person who seems to shatter lives around him. The narrators were all perfect. The main thing the story left me with was how very important ones relationship with their young children is and how their future lives pivot on this upbringing. I do hope I don't have to wait too long before Liz Nugent's next book.

This is such a good book. The story is engaging from the first sentence. It is beautifully written, each chapter being an account from Oliver and from each of the main people whose lives his actions impact upon. I was a little dubious initially at the list of so many narrators, but each of them did an excellent job of voices one of the characters.

From the start we know that Oliver has, to the great surprise of those who know him, savagely attacked his wife. However, this is not a crime novel, but more an in-depth analysis of why a man, with no history of violence, should explode in this way. Gradually his story is revealed in snippets gleaned from the testimony of those who know him and from his own thoughts. Although Oliver is a cold, unsympathetic character my attention never flagged and I was gripped by the slowly unfolding narrative and eager to learn more what made this man the person he turned out to be.

The book has been compared to the kind of psychological approach favoured by Ruth Rendell and it is certainly more akin to that style than a simple crime novel.

There are several narrators who voice the different characters and this adds veracity to the impression that this is a real story.

Much better when you listen to it twice

What made the experience of listening to Unravelling Oliver the most enjoyable?

It was intriguing. The plot was a surprise. Olivers character was molded by his circumstances, which were explored both subjectively and objectively

when olivers deception was uncovered

This book had me wanting to find time and opportunities to listen to the next chapter. I liked the multiple voices adding new layers to Oliver’s mysterious past. It is beautifully written, for example the author’s description of the grandfather clock “ticking its metronomic miseries”....and more wonderful descriptions bringing scenes alive.

This author Liz Nugent is very clever and writes a good yarn. Great narrators. This is the sort of story I just love. I’m going to give the author another go.

I was hooked from the first few minutes by the chocolatey performance of the main character. It wasn’t long before that hook became, at times, most uncomfortable as this superb story immerses you into a study of psychopathy and consequence. I don’t think you’ll hear better performances - they’re THAT GOOD. What they bring to Liz Nugents work is the most compelling fleshing out of already rich characters. It’s absolutely a ‘must read’