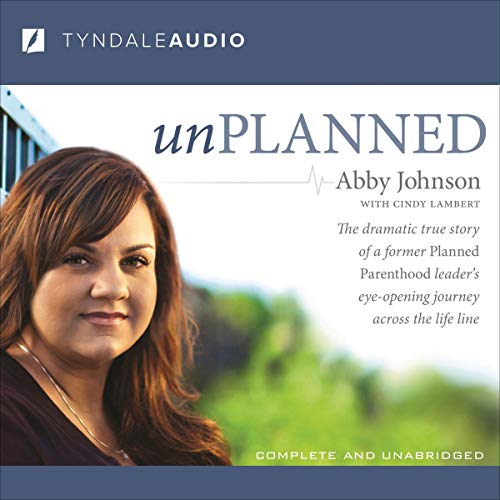 By: Abby Johnson,Cindy Lambert
Narrated by: Abby Clark
Try for $0.00

Abby Johnson quit her job in October 2009. That simple act became a national news story because Abby was the director of a Planned Parenthood clinic in Texas who, after participating in her first actual abortion procedure, crossed the line to join the Coalition for Life.

Unplanned is a heartstopping personal drama of life-and-death encounters, a courtroom battle, and spiritual transformation that speaks hope and compassion into the political controversy that surrounds this issue. Telling Abby’s story from both sides of the abortion-clinic property line, this book is a must-have for anyone who cares about the life-versus-rights debate and helping women who face crisis pregnancies.

What listeners say about Unplanned

My greatest take-away from this book was the insight and understanding it gave me toward people who work in the abortion industry. I have been praying on the sidewalks in front of abortion centers for 18 years, but the people who work in the centers have been a mystery to me for the most part. Abby gave me a look inside their world and inspired in me greater feelings of compassion and understanding for them.

What does Abby Clark bring to the story that you wouldn’t experience if you just read the book?

Abby Clark has a youthful vivacious voice that sounds like the young college student with a heart for helping others that Abby Johnson was.

The description of how Abby Johnson felt when she saw the ultrasound abortion, her account of the day she left Planned Parenthood, and her story of suffering through a medical abortion all were riveting and revealing moments.

I am so very glad I heard this story. It has made me a better pro-life advocate with a deeper and more heartfelt longing to reach out to everyone hurt by abortion, including those who work in abortion centers. There are really no "enemies" in this culture war, only victims who need understanding, love and healing.

What did you love best about Unplanned?

The reader did a spectacular job reading this book in an enthusiastic, lively, heart-wrnenching but not overly dramatic way. The book was very well-written, and presents one woman's story about her life within Planned Parenthood and then out of it.

I like how the author presents the story with compassion and understanding for both sides. It is a contentious issue, and people often forget that both sides believe what they believe because they want the best for women. They just come at it from different perspectives.

Which character – as performed by Abby Clark – was your favorite?

Abby performs Abby Johnson best. She does a great job just being natural.

Yes. I didn't want to stop listening. I only did to go to sleep!

This story was such a page turner and so humbly insightful! I enjoyed every minute of it and got soooo much out of it! I recommend it to everyone, no matter what your background or beliefs are! Something in it for everyone!

This book is such a wake up call to what Planned Parenthood really cares about. Abby Johnson ' s story is one of true reliance on God and His ability to turn her toward the light!

Abby's story although much different than mine it is much the same. What an encouragement, supportive, and accountable for the need & want to stay in the race. Thank you Abby for speaking the truth in love.

This book is a must-read for anyone that is unsure on their stand regarding the Pro-Life vs. Pro-Choice debate.

Would you try another book from Abby Johnson and/or Abby Clark?

I admire the author for her stance. The reader has a high squeaky voice. Fingernails on the chalkboard.

Wow! This was an eye opener & very fascinating. WELL DONE! The topic is sensitive and deserves serious consideration. Not something to ignore! It's an unconventional story that develops a conundrum that we all face. It tells of a heartfelt experience that is very real! This true story unraveled in an intriguing way. It was read with a voice that was easy on the ear and supported my ability to comprehend.
I highly recommend this audio book.

CAUTION! Do not waste your time if you are narrow minded & unwilling to contemplate & confront the truths of life.

I loved the narration. sounded so much like Abby. what a journey she has been on. the story renewed my trust that people's hearts can be changed

Such an emotional yet moving story. Johnson really tells you both sides of the story in a fair & balanced way.