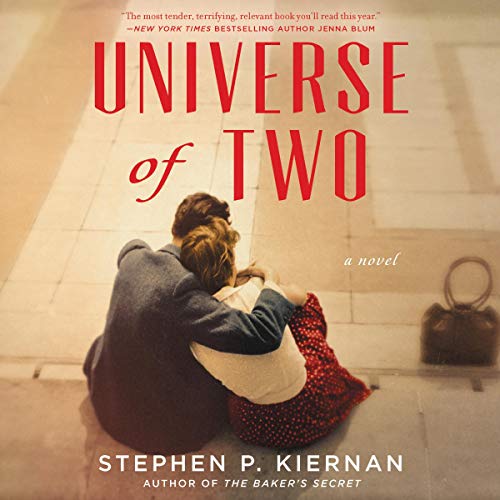 By: Stephen P Kiernan
Narrated by: Cassandra Campbell
Try for $0.00

From the critically acclaimed author of The Baker’s Secret and The Curiosity comes a novel of conscience, love, and redemption - a fascinating fictionalized account of the life of Charlie Fisk, a gifted mathematician who was drafted into Manhattan Project and ordered against his morals to build the detonator for the atomic bomb. With his musician wife, he spends his postwar life seeking redemption - and they find it together.

Graduating from Harvard at the height of World War II, brilliant mathematician Charlie Fish is assigned to the Manhattan Project. Working with some of the age’s greatest scientific minds, including J. Robert Oppenheimer, Enrico Fermi, and Leo Szilard, Charlie is assigned the task of designing and building the detonator of the atomic bomb.

As he performs that work, Charlie suffers a crisis of conscience, which his wife, Brenda - unaware of the true nature of Charlie’s top-secret task - mistakes as self-doubt. She urges him to set aside his qualms and continue. Once the bombs strike Hiroshima and Nagasaki, the feelings of culpability devastate him and Brenda.

At the war’s end, Charlie receives a scholarship to pursue a PhD in physics at Stanford - an opportunity he and Brenda hope will allow them a fresh start. But the past proves inescapable. All any of his new colleagues can talk about is the bomb and what greater atomic weapons might be on the horizon. Haunted by guilt, Charlie and Brenda leave Stanford and decide to dedicate the rest of their lives to making amends for the evil he helped to birth into the world.

Based on the life of the actual mathematician Charles B. Fisk, Universe of Two combines riveting historical drama with a poignant love story. Stephen Kiernan has conjured a remarkable account of two people struggling to heal their consciences and find peace in a world forever changed.

What listeners say about Universe of Two

I loved parts of this book but other parts made me sad and even anxious because I sympathized with the characters so much. Brenda is a wonderful character and it was interesting to see her mature throughout the story. I'm not sure how this male writer manages to portray the female psyche so well. There was a lot of interesting historical facts threaded throughout the story. This author's stories could make you fall in love with history. Although this novel is very good I resent the fact that it wasn't as good as the Baker's Secret.

Of all books about WWII, I enjoyed this one so much that it truly surprised me. It’s about the power of music. It’s a love story. It’s history. I’ve recommended it to friends and family, loved it.

absolutely loved it! read it for a bookclub at work and the author joined via zoom. such a wonderful story. I highly recommend!

Not a dry eye

Well written novel which immersed you into 1940’s and the throws of WWII. Beautifully written and follows two people that are defined by the love for each other.

3.5 stars
Good enough to keep me interested but not the "I can't put it down" type of book that Baker's Secret was.
It was a very wordy book...a lot of info I thought unnecessary, or too much info about a topic.
And Brenda was not likable at all for me. I found her to be so self centered. Seriously? She blames the development of the the A bomb on herself for pushing Charlie? Talk about self importance!
Tho an interesting topic, the Manhattan Project, I don't think there was any "new" type of information included. While I realize that most info about the Project is now common knowledge, usually an HF books has me googling for more information, but not this one.
I think the more in depth parts were regarding the organs, but nothing of real interest to someone who does not play the organ. And that is one reason I found it so wordy. I found the sections that dealt with the organ long and boring.
And normally I like the narrator, Cassandra Campbell, but not this time. Lately I find her female characters sound alike, a lot like a 50's starlet trying to sound like a femme fatal or a lolita.

Enjoyed every minute of this fascinating look at a critical time in our history developing and the dropping the A Bomb on Hiroshima. Deftly woven into this story was a wonderful tale of love and the commitment of two people each affected in their own way by the detestation they had somehow had a hand in creating. I could not put this book down. Loved it.

Couldn't Stop Listening/Hated For The Story to End

Cassandra Campbell brought Brenda to life in the most extraordinary way. Brenda and Charlie's story is a beautiful tribute to life during the war years. Stephen P. Kieman weaves a story that is both mesmerizing and memorable. "Universe of Two" bring together two very talented people, the author and the narrator and a story I didn't want to end.