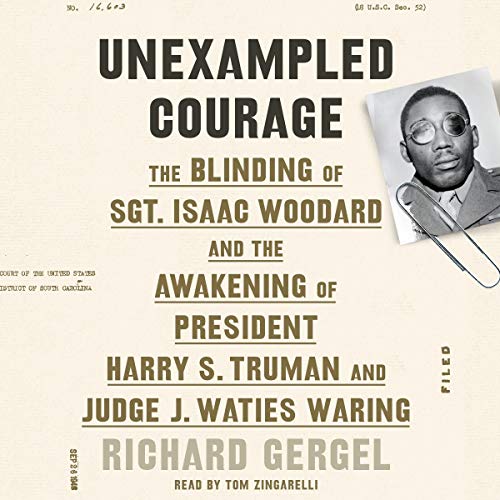 This program includes an introduction read by the author.

How the blinding of Sergeant Isaac Woodard changed the course of America’s civil rights history.

On February 12, 1946, Sergeant Isaac Woodard, a returning, decorated African American veteran, was removed from a Greyhound bus in Batesburg, South Carolina, after he challenged the bus driver’s disrespectful treatment of him. Woodard, in uniform, was arrested by the local police chief, Lynwood Shull, and beaten and blinded while in custody.

President Harry Truman was outraged by the incident. He established the first presidential commission on civil rights, and his Justice Department filed criminal charges against Shull. In July 1948, following his commission’s recommendation, Truman ordered an end to segregation in the US armed forces.

An all-white South Carolina jury acquitted Shull, but the presiding judge, J. Waties Waring, was conscience-stricken by the failure of the court system to do justice by the soldier. Waring described the trial as his “baptism of fire” and began issuing major civil rights decisions from his Charleston courtroom, including his 1951 dissent in Briggs v. Elliott declaring public school segregation per se unconstitutional. Three years later, the Supreme Court adopted Waring’s language and reasoning in Brown v. Board of Education.

Richard Gergel’s Unexampled Courage details the impact of the blinding of Sergeant Woodard on the racial awakening of President Truman and Judge Waring and traces their influential roles in changing the course of America’s civil rights history.

What listeners say about Unexampled Courage

Note: I listened to this at 1.25 speed which was just enough to make up for the narrator’s slow Southern cadence.

This is a lively, well written history of the post world war 2 roots of the civil rights movement that posits Isaac Woodard’s story and judge warren’s reaction to it as a unique catalyst for change in judicial fairness toward black litigants and the first nail in the coffin of overt and unapologetic African American oppression in the USA. The author keeps us interested with frequent forays into the personal lives of the real people involved in the cases he covers and his suspenseful treatments of how the cases unfold in court. Bringing in color from media stories of popular reaction to the events covered, such as how Orson Wells became involved, enlivens the narrative. I also liked learning about how Walter White (and the NAACP) and especially Thurgood Marshall strategized to stealthily build a path to real reform using the smallest stepping stones. Also, for me it was a revelation to learn how much Truman factored into the civil rights movement. I highly recommend this book to anyone who likes history and has an interest in the topic of race relations. This book should be required reading for high school and college students. Everyone in this country should have a moral obligation to know Woodard’s story and in so doing truly understand the tip of our country’s unconscionable legacy of lynching (literal and figurative) of fellow citizens.

If you're looking for a story with many lessons for making positive change in your world, this is it. This story illustrates that perfect people, optimal circumstances, and hordes of followers are not the key to fostering social transformation. Simply pursuing what is right, one step at a time, and not allowing fear or public opinion to stop you...these are the keys and all the Universe will conspire to help such a determined person.

This was a fine book and reading. Wonderful in so many respects - the writing, subject matter, etc. As a African American lawyer, I was moved by the retelling of this story. Judge Gergel should be applauded for his efforts here. The book is well worth the time reading it for anyone with passing interest in American civil rights history in the post-WWII era.

An Unknown Story to Many Americans

A friend suggested I read this book, but I decided on the audio version. In hindsight, the book would have been better as it was somewhat challenging to keep up with all of the different characters that are included in the book. While the first part of the book centers around the savage blinding of Sgt. Woodard in a racially motivated attack, the rest of the story is how the attack on Woodard affected two prominent individuals: President Harry Truman and Judge J. Waites Waring. In that sense, there are really three stories in one presentation. The last part of the book gets in to all of the numerous court cases leading up to Brown vs. Board of Education, and the civil rights journey. Overall, a good story and one most Americans will find compelling.

A heartbreaking story well told be Judge Gergel, and the lasting legacy of this story,

An Inspiring Piece of Forgotten History

I was riveted to this amazing story of how the blinding of Isaac Woodard prompted both Judge Waring and President Truman to fight for the civil rights of African-Americans. Gergel not only wrote a very well researched account, his narration made the Audible version even more compelling as his passion broke through at key points.

I live in South Carolina and this is a great history lesson for anyone in SC, but it is also a great story with national importance for anyone interested in the civil rights movement in America.

I wish Judge Gergel had read the book. The narrator’s voice was not quite the right fit for this book.