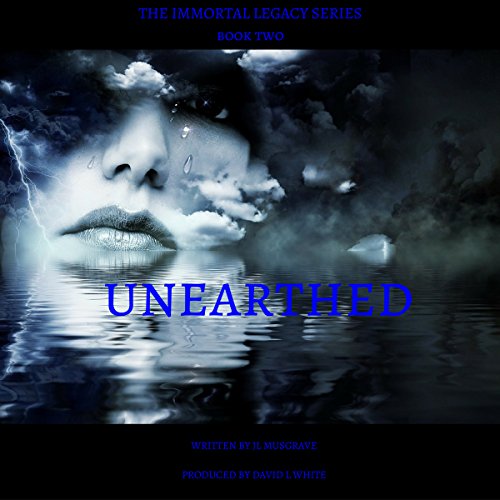 Alice Lange was just another small town college girl trying to find her place in the world. In her last undergraduate semester, Alice enrolls in a class with Indiana's renowned archaeologist, Andrew St. John, and her life is never the same. From the moment St. John enters the classroom Alice's life is plunged into the dangerous waters of his past. For Andrew St. John carries a secret so dangerous it has caused the death of everyone he has ever cared about and Alice Lange has just made it to the top of death's list. From one simple meeting, one longing glance witnessed by the darkness itself, would emerge a cause and effect storm of epic proportions. Can St. John save the woman he loves or, like everyone who came before her, will he lose her forever?

Unearthed, book two in The Immortal Legacy Series, is a tale of blood, passion, pain, abduction, death, and eternal life. Unearthed touches on topics of vampirism as an immortal virus, the study of archaeology, and the religious and cultural practices of the Moche people in South America. Unearthed is set in the Midwestern college town of Bloomington, Indiana, but ventures forth into Peru, South America, and Cody, Wyoming during important climactic scenes. The Immortal Legacy Series begins with book one, Unreal, and tells the story of a young woman and the two immortal men who stole her heart. The concept of immortality is portrayed in this series as a genetic trait that upon the death of its carrier restores life and limb. Unreal sets the stage for the series introducing the concept of immortality as genetic, while playing off of true historical concepts such as the Greco-Persian wars and the Persian King Xerxes' immortal guard of 10,000 men.

loved it. left me wanting more! could not put it down the entire time. look forward to more of these books.