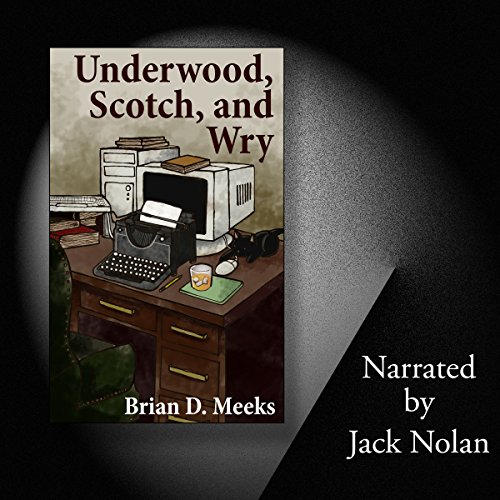 Underwood, Scotch, and Wry is a humorous look at social media through the eyes of a Luddite college professor .

Arthur enjoys drinking, the company of his female TAs, and generally being a pain in the butt for the dean of the English department. He has tenure. He hates computers.

The dean hates him.

Watch as Arthur and the dean engage in an angst filled battle to end (or save) his job. This humorous fiction will keep you listening. If you like social media, blogging, and mockery, you'll enjoy my first satire novel Underwood, Scotch, and Wry.

What listeners say about Underwood, Scotch, and Wry

Great match of writing and narrator!

Imagine a total Luddite professor pushed into teaching a semester on social media. Snide and snarky from the git-go, the snickers and groans just keep on coming. If you're looking for anything serious here, you're in the wrong place! Loved it!
Jack Nolan is the perfect narrator for this farce.

I just finished the book. That was fun! Looking forward to more from the author.

A less annoying narrator would have helped, but it needed a less awful main character, more interesting supporting characters, less sexism, and a plot worth caring about. Meeks needed to play to his strengths: spend less time forcing bad jokes, less time defending the ivory tower old boys club, and more time with the introverted, introspective scenes. His scenes writing about writing, talking about reading, and actually unpacking social media...those were good. Framing that commentary within this story and with these characters was not.

Has Underwood, Scotch, and Wry turned you off from other books in this genre?

I don't know what genre this falls under, and it hasn't turned me off from books in general, so...no? I certainly won't be reading any sequels, but I would be willing to give Meeks another shot at something different.

Would you be willing to try another one of Jack Nolan’s performances?

Maybe if he stopped trying to be bouncy and chipper, and learned the value of pacing. He kept trying to make things more lively and funny, but I think it would have fit the author's tone a little better if he had been more straight-faced. Short pauses and deadpan delivery can be great devices for humor, especially the dry, ironic humor so many academics are prone to--as a grad student, I know firsthand. Sure, your average American probably won't get a lot of it, but your average American probably also isn't going to get all the literary references, so since they've already lost the broadest audience, Nolan and Meeks should be playing to the audience they have.

So I would have to listen to a sample first, before getting anything Nolan did again.

Boredom and irritation, for the most part. Arthur constantly made me roll my eyes, and the only character even vaguely dissimilar to a caricature was Eric. The dialogue was also pretty bad.

However, there were some really great comments about literature and social media that made me smile and made me think, so this book isn't a complete write-off.

The female characters are all either stupid, sex toys, enablers, incompetent, or any combination thereof. Hell, most of the male characters are also stupid, enablers, and incompetent, just with an added helping of misogyny and homophobia. Meeks' view of women seems to be fairly derogatory, but his view of men seems to be, if anything, almost worse. If his experience of academia--and humanity, for that matter--is actually like what he portrays here, I feel bad for him.

And if he was trying to make some kind of commentary with the caricaturization and plot devices, either I didn't get it or it didn't work.

Performance and story line were top notch and a lot of fun . Definitely recommended