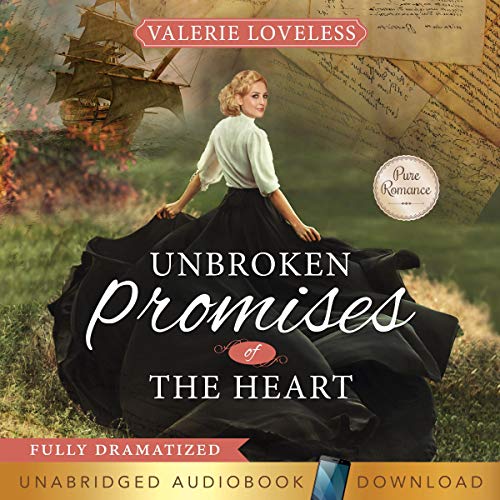 Unbroken Promises of the Heart

Dramatized audiobook! Book 2 of the Promises of the Heart series.

Liz and Mary scheme to make Mary's dream of owning a hat shop come true. They are unaware that their husbands, Michael and Peter are scheming behind their backs to try to realize a dream of theirs that the girls do not discover until late in the story. Harriet, Liz's sister, has come home and has eyes for the mysterious Isaac all the while being pursued by the quirky revered Lyons.

Harriet, with the help of her famous sister, gets a job editing at the Gazette but the pudgy, foolish son of the owner, continually makes her job awkward and difficult. He is determined to undermine her position and make her his wife. Liz struggles with being a newlywed, being "with child" and keeping up on her writing, Mary and her sister Harriet attempt to help her navigate this difficult time as her Peter seems to be preoccupied. In the meantime, the gazette featurette progresses with the botched wedding of Lavender and John by the miraculously undead pirate, Morose.

Morose claims to have been rescued by a mermaid. Morose bestows a precious gift to Lavender and then she uncharacteristically runs off with him. John has to travel the world to discover the reason his true love has left him for Morose with the help of Paully and his reformed daughter Nan Fey.

What listeners say about Unbroken Promises of the Heart

Fun conclusion to the Promises of the Heart series

Unbroken Promises of the Heart is the sequel to Enduring Promises of the Heart. With multiple storylines and characters, this story weaves the fantastical with the ordinary. It picks up right where the other story left off. Liz and Peter are expecting a child and Mary and Michael are trying to find balance in married life. Liz’s sister Harriet has taken a job at the newspaper and has not one but three men vying for her affections. In Liz’s serial story, Capt. Morose has interrupted John and Lavender’s wedding and bewitched Lavender into loving him with a magical pearl given to him by a mermaid.

I enjoyed the continuation of the fictional serial story written by Liz. Mermaids and pirates add some fun twists and turns, as well as the magical pearl. I liked the way the author gave snippets of the story throughout leaving it on a cliffhanger each time. I wasn’t quite sure how everything would be resolved and was glad it turned out the way it did.

The introduction of Liz’s sister Harriet and her three suitors added a romantic touch. I enjoyed her trying to figure out who she really wanted and what was most important in the end.

While there was certainly a lot going on, I wasn’t as engaged in Liz’s and Mary’s stories as previously. With Liz now expecting and the problems of everyday life consuming the main characters, I missed the romance of the previous book. I also found some of the plot frustrating. For instance, Mary and Liz are irritated with their husbands because they keep disappearing at night without explanation. As the story progressed, I became increasingly annoyed with the situation, the lack of communication, and the seemingly simple solution.

The audiobook version was fully dramatized. The added sound effects contributed to the fun of the story. I enjoyed the male narrator the most and found his various accents and narration most pleasing. Sometimes with the female narration I had difficulty distinguishing between characters and found it a bit too melodramatic for me.

All in all, this is a fun sequel to Enduring Promises of the Heart and brings a nice closure to the series. I highly recommend reading the previous book in the series because characters and situations in this book are a continuation of what happened in the first. I received a complimentary copy of this audiobook from the publisher. All opinions are my own and I was not required to provide a positive review.

The Enduring Promises of the Heart series is enjoyable and fun. Loveless and Bradford do a wonderful job with the dramatized narration. The pirate voice is done well. Mary and Liz are enjoyable characters. Lavender and John have another high stakes adventure bound to entertain the listener/reader. Can't wait to see what Loveless brings to us next!