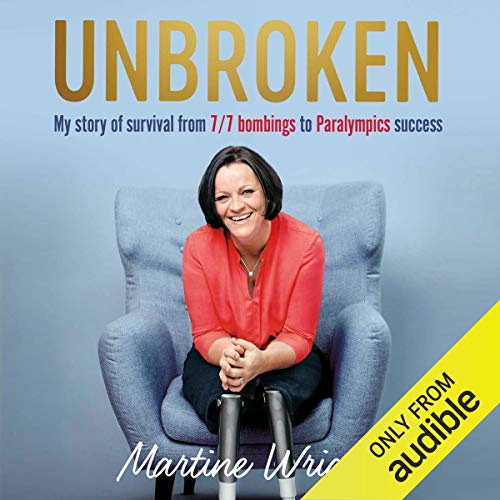 My Story of Survival from London 7/7 to Team GB Success
By: Martine Wright
Narrated by: Zara Ramm
Length: 6 hrs and 56 mins
Categories: Bios & Memoirs, Celebrities
5 out of 5 stars 5.0 (2 ratings)

In 2005, Martine Wright was a marketing manager for a web company, focused on her career. In 2015 she was voted one of the '50 Most Powerful Women in British Sport' by The Independent. In between those dates, her life changed forever when she lost both of her legs in the London tube bombings of 7/7. She was, in fact, the last person to be brought out alive from the atrocities. She lost 80 per cent of her blood, was in a coma for 10 days and underwent 10 months of surgery. Unbroken is her deeply moving and inspiring account of how she not only survived one of the worst terrorist attacks in British history but turned that trauma and tragedy into hope.

Not only did Martine survive her horrific injuries but, having never played sport seriously before, she took up sitting volleyball as part of her rehabilitation and went on to represent Great Britain at the Paralympics in London 2012 - a deeply poignant moment that marked her journey from tragedy to triumph. Since then she has become a national figure: a formidable, powerful, brilliantly funny, hugely engaging heroine who has come back - almost literally - from the dead. Paralympian, Helen Rollason award winner at Sports Personality of the Year 2012, Strictly Come Dancing contestant, charity fundraiser, inspirational public speaker, and so much more, Martine has emerged from unimaginable adversity to change her life, and the lives of those around her for the better.

inspiring story, heard it twice, became a huge fan of Martine Wright. It is a must read.

I'm still trying to swallow down the lump in my throat that started with the first sentence of Unbroken and stayed with me until the last. Can a person ever get tired of hearing they are remarkable? Martine Wright truly is a remarkable woman as well as inspirational, admirable, warm, funny, the list could go on and on. Why people like the Kardashians are famous when we have true role models such as the Wiltshire-Knight family is beyond me. The strength and love the Wrights showed their daughter and sister is a beautiful thing to hear. Nick must be a wonderful man but most importantly, only a magnificent person would inspire such a level of love and devotion and this book depicts clearly how spectacular Martine Wright was, and is. Zara Ramm's narration was, as always, perfect. I was swept up in myriad emotions listening to this book, all of them positive and life affirming. Ms Wright, it was a privilege and a honour to get this insight into your life. I salute your bravery and positive stance. 5 stars and a highly recommended from me.

It's got it all

Sad, informative, funny, uplifting and thought provoking - this book has it all!

Martine is an amazing person but she also shares her success and survival with those around her that got her through this journey.

A great read of how to overcome what life throws at you.

A must-read to remind you that life is yours for the taking, to do with it as you wish, no matter what your obstacles.
Martine was faced with the most horrendous tragedy but she faced it head on and she is thriving. It is at times difficult to listen to, but if she can go through it then we can listen to it. It's not made to shock or hurt, it's honest and clear. A story of survival indeed.

Having lived through 7/7 it was so nice to find such a frank and inspirational book written by Martine and narrated by Zara Rann. Taken from the initial event to the present day and the way it had effected her and her family and friends.

I have seen so many books written about 9/11 and I am truly saddened with what happened in America but I am so pleased that Martina was brave enough to tell us her story instead of using the British stiff upper lip and wishing the event would have not happened.

What a amazing woman

So well written
so lovely to listen to
such courage and such a big heart 💓
To share your story.
Want be disappointed if you buy this book