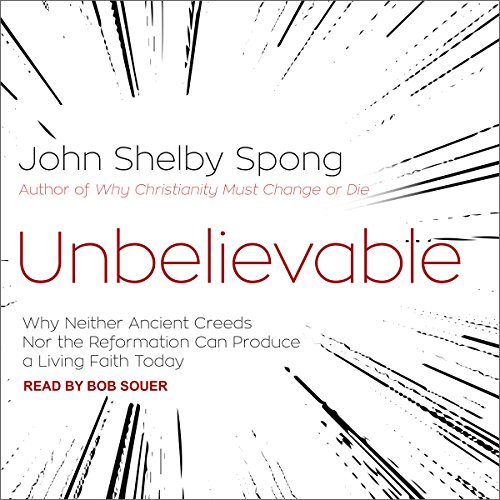 By: John Shelby Spong
Narrated by: Bob Souer
Try for $0.00

Five hundred years after Martin Luther and his Ninety-Five Theses ushered in the Reformation, best-selling author and controversial bishop and teacher John Shelby Spong delivers 12 forward-thinking theses to spark a new reformation to reinvigorate Christianity and ensure its future.

At the beginning of the 16th century, Christianity was in crisis - a state of conflict that gave birth to the Reformation in 1517. Enduring for more than 200 years, Luther's movement was then followed by a "revolutionary time of human knowledge". Yet these advances in our thinking had little impact on Christians' adherence to doctrine - which has led the faith to a critical point once again.

Spong contends that there is mounting pressure among Christians for a radically new kind of Christianity - a faith deeply connected to the human experience instead of outdated dogma. To keep Christianity vital, he urges modern Christians to update their faith in light of these advances in our knowledge, and to challenge the rigid and problematic Church teachings that emerged with the Reformation. There is a disconnect, he argues, between the language of traditional worship and the language of the 21st century. Bridging this divide requires us to rethink and reformulate our basic understanding of God.

What listeners say about Unbelievable

a book that will move one out of the bondage of the theological concepts. great

I read this work the first time and listened to it the second. This work is Bishop Spong's opus, which is transformative!

Prepare to be challenged

I did not agree with Spong', but my faith was strenghtened. Good for discussion group.

This is by far the most meaningful book I have ever read or listen to! I loved it! I am no biblical scholar, however I live and feel Christianity deeply. This book completely resonated with me, and it seems Shelby Spong could have entered my mind for ideas. If you consider yourself a seeker, this book is for you! A beautifully book written by a beautiful soul!

A must read for All thinking Christians and Jews

If you are not fearful of thoughts that may rock your faith and increase your faith ....you will want to hear the teaching of John Sponge!

A compelling vision for the future of Christianity. I’d recommend it to anyone who struggles with the unbelieveability of supernaturalism.

The Author attempts to rehabilitate "God" by reinvented a character more in contrast with, than inspired by, the original texts. In the end, he, like so many "peaceful" adherents of explicitly violent religions throws his support behind the project of approving "The Bible" in its current form as fit for service, with the silver bullet of antiliteralism as the only qualification.