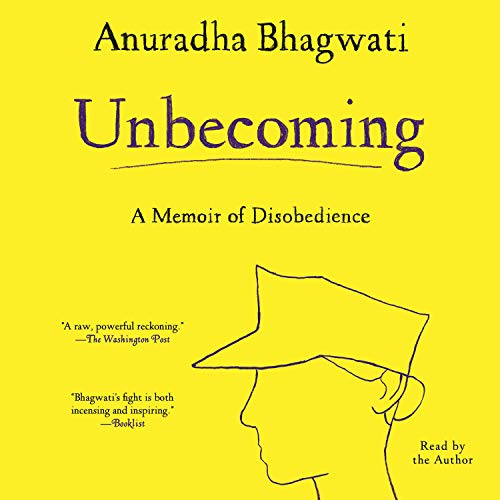 A raw, unflinching memoir by a former US Marine captain chronicling her journey from dutiful daughter of immigrants to radical activist effecting historic policy reform.

After a lifetime of buckling to the demands of her strict Indian parents, Anuradha Bhagwati abandons her grad school career in the Ivy League to join the Marines - the fiercest, most violent, most masculine branch of the military - determined to prove herself there in ways she couldn’t at home.

Yet once training begins, Anuradha’s GI Jane fantasy is punctured. As a bisexual woman of color in the military, she faces underestimation at every stage, confronting misogyny, racism, and astonishing injustice perpetrated by those in power. Pushing herself beyond her limits, she also wrestles with what exactly drove her to pursue such punishment in the first place.

Once her service concludes in 2004, Anuradha courageously vows to take to task the very leaders and traditions that cast such a dark cloud over her time in the Marines. Her efforts result in historic change, including the lifting of the ban on women from pursuing combat roles in the military.

A tale of heroic resilience grappling with the timely question of what, exactly, America stands for, Unbecoming is about one woman who learned to believe in herself in spite of everything. It is the kind of story that will light a fire beneath you, and that will inspire our next generation of fierce female heroes.

What listeners say about Unbecoming

A Topic Few Have Had the Gumption to Write on

A well written book about a topic few have the fortitude to write about. It was humbling, embarrassing and rewarding to read about this side of the Corps. We unfortunately need more brave souls like this to speak up and bring about the changes so desperately needed.

Self worth and Others Approval

As I listened to this story, I couldn’t help but think how important it is for parents to be supportive of their children during their formative years. Anuradha might have viewed her Marine Corps experience in a much different light if she knew her worth earlier on. While I don’t agree with some of her opinions and actions (which is why I give it a 4), I very much appreciate hearing her perspective. I’d recommend the book to all service members.

Unbecoming landed in my queue based on recommendations from a women's officer forum I belong to. I didn't know what to expect other than a raw and truthful telling of a Marine's journey as a woman. Perhaps because of my desensitization of our shared experiences in the military, it took me a few chapters to really get into Bhagwati's story. Once I did, I was hooked. I love the slow and viscerally painful transcendence into her final understanding and acceptance of herself. What she was able to accomplish throughout her career is commendable and should be required reading for any young woman entering the military, regardless of branch. I'm thankful for women like Bhagwati who take the pain and trauma and of their experience and turn it into something powerfully transformative for our future generations. I'm sorry for what you endured and I am thankful for what you accomplished for the rest of us and our future daughters.

This is an excellently written book. I enjoyed listening to the author narrative the book.

This was a hard read for me being a female veteran who experienced many of the same things the author did. The trigger alert is for other female veterans. I met the author at a SWAN Summit and was very impressed with what was being done. Despite the triggers I was very happy I read this and highly recommend it.

A Raw Portrait of Military Sexism

Anuradha Bhagwati’s narration held me spellbound. Her intimate experience as a Marine Corps Captain is raw and compelling. As an Army daughter raised at a large North Carolina Base, I am acutely aware of sexism and blatant disrespect of service women. Ms. Bhagwati is a hero to share, fight for service women’s rights. Her life experience not only uplifts survivors of sexual violence & harassment gives the power back to them.

Well written. Well narrated. Thank you to Ms. Bhagwati for your courage and unwavering actions to ensure service women are respected and acknowledged.

As much progress as we see in having women's equality in the military and the headlines and attention given to the #MeToo movement, there is still a long way to go in today's military. We all should remember to give visibility and show confidence in all types of diversity in the military and all interactions with our fellow human beings.