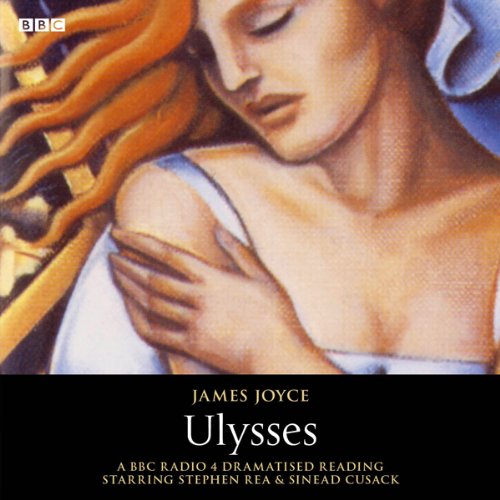 By: James Joyce
Narrated by: Stephen Rea
Try for $0.00

The young poet Stephen has been recalled from Paris to Dublin to be at his mother’s deathbed. But he refuses her dying wishes: to kneel and pray for her. Now, holed up in his Martello tower outside the city walls, he has to suffer the taunts of Buck Mulligan by day and, by night, the vision of ‘her eyes, shaking out of death to shake and bend my soul.’ Timelessly evocative, Ulysses is far more than the story of Stephen Dedalus’ journey through Dublin.

It is a huge, rich portrayal of human life. In this magnificent, highly accessible, part reading part dramatisation - which includes the famous Molly Bloom soliloquy - the power and truth of Joyce’s vision is as potent as ever. Ulysses stars Stephen Rea and Sinead Cusack, with an introduction by Seamus Heaney.

What listeners say about Ulysses (Dramatised)

Appreciating Ulysses for the first time

Where does Ulysses (Dramatised) rank among all the audiobooks you’ve listened to so far?

Ulysses deserves its reputation as the greatest novel of the twentieth century. The reader does need additional aids in order to follow what Joyce was doing with his narrative, and listening to the performance is good preparation for sitting down with the book and with at least two commentaries. I think that The New Bloomsday Book by Harry Blamires and Ulysses Annotated by Don Gifford are indespensible for anyone who was not living in Dublin in 1904, and that means most of us/

Have you listened to any of Stephen Rea’s other performances before? How does this one compare?

I have seen Stephen Rea on screen in a couple of films, where he performed his part quite well. Reading aloud is part of what any first-rate actor needs to be able to do, and he reads this with genuine understanding and skill

If you could rename Ulysses (Dramatised), what would you call it?

I think that Ulysses (Dramatised) works quite well. Ulysses Made Funny might also be appropriate, but the book was funny the whole time. This performance brings out the tremendous amount of humor which I never appreciated while reading silently to myself. "An entry into Ulysses" could also be a good title.

The performance is greatly enhanced by two devices: having a number of different voices, and by having some audio enhancements, such as music here and there. Ulysses is full of musical references, only a few of which are captured in this performance. In the Circe episode especially, the interaction of sound and drama makes the whole thing flow along powerfully.

The multitude of voices, male and female, add greatly to the quality of the production. If the listener goes to the "Nausicaa" episode, the rewards of doing so will be considerable. A skilled actress reads the first part, which takes place inside the mind of the young Gerty MacDowell; the freshness and innocence of an adolescent girl lead up to her orgasmic delight at seeing the bursting of the fireworks in the sky. This is a passage that makes everyone who hears it laugh out loud--of course Joyce intended it to be read this way!

Although the production is greatly abridged, and not a substitute for the whole book, it does provide an entry into the book and its lyrical qualities. I cannot recommend it too highly for anyone who has wanted to read the great book but who has become bogged down in its obscurity.

The dramatization of this book was great

The dramatization really helped me to appreciate the story as well as all of the inventive writing. It is the first time I've ever made it all the way through this book!

A fantastic way to "dip your foot" into the monumental novel that is Joyce's "Ulysses"... It says it's "dramatized" but it's a literal reading by multiple actors of an abridged version of the full novel; all of the text comes directly from the book itself. It's often said that "Ulysses" should be read aloud to more fully capture the puns and so forth and this audiobook proves that. The actors do a fantastic job in every way and really bring the "sound" of the book to life. I've long wanted to read the full novel but have always found it's length and complexity daunting (only having read about a quarter of it prior to this). With having the overall story and flow of the text (which changes from section to section) now under my belt, I feel much more ready to dive into the full novel (which I will be reading soon with a couple of guides at the same time). Highly recommended even if this is as far as you go with "Ulysses"... It'll be nice to have this to play again after I've tackled the full novel when I want to revisit "Bloomsday" and Joyce's amazing writing but don't have the time to commit for the full book.

Would you consider the audio edition of Ulysses (Dramatised) to be better than the print version?

Better? Not sure, but at least I can get through this classic without getting lost. The 30-minute episodes are easy to follow.

What other book might you compare Ulysses (Dramatised) to and why?

The Foundation Trilogy adaptation, another sprawling work made for the radio.

The episode in the brothel, which is totally surreal.

It's easier than the book.

The three main actors were all superb. Stephen Rea can do no wrong.

The last chapter was the best. Molly's soliloquy was well done. If not for audio, I probably coukd not have completed the book.

Boring story--- not my kinda book

I didn't finish it--- the reader is great but I don't want to even imitate the story , no one would get it--- its just not my kind of story.

What does Stephen Rea bring to the story that you wouldn’t experience if you just read the book?

Did Ulysses (Dramatised) inspire you to do anything?

A GOOD WAY TO LEARN WHAT ULYSSES THE BOOK IS ABOUT

If you could sum up Ulysses (Dramatised) in three words, what would they be?

Stephen Rea gives a good clear cut all round performance, he was aproachable and life like. You can relate to the character and appreciate how he feels about his cirmuctances.

I did listen in one go, I was recovring from an operation which meant I could not get out of bed for a few days, so Ulysses dramatised was a great way for me to understand this great work. I have read the book, but admit in drama it is much better to understand what this huge tome is about. I am now reading the book again and enjoying much more than first time round.

Having struggled to get going on the paper version over the years this was a great alternative. I would definitely go for the dramatized version, it really brought the characters to life. Given the range of characters and accents this is difficult to do when reading it. Good to listen to whilst out for a walk.

This really is top quality bbc stuff. Great performances and sympathetic editing. Really gets you To the comedy of old Joyce and away from all the academic malarky

Not the usual dramatisation, more of a dramatised reading. The cast is good. And the more times you listen the more you pick up.

A compelling dramatisation of Joyce's great (and challenging novel). I wish I had been able to listen to this when reading in college. Brings the story to life without losing the literary genius of the author.

I have tried reading Ulysses twice and gave up. I thought I would give it a go as an audible book. The performances of the narrators are very good.

However, Joyce's work seems to be a case of "Emperor's new clothes". It's like the ramblings of a mentally ill person. If you want to lose several hours of your life, go ahead.