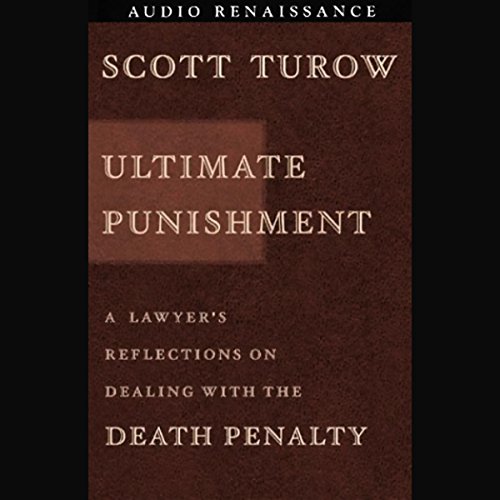 Scott Turow is known to millions as the author of peerless novels about the troubling regions of experience where law and reality intersect. In "real life," as a respected criminal lawyer, he has been involved with the death penalty for more than a decade, including successfully representing two different men convicted in death-penalty prosecutions. In this vivid account of how his views on the death penalty have evolved, Turow describes his own experiences with capital punishment from his days as an impassioned young prosecutor to his recent service on the Illinois commission which investigated the administration of the death penalty and influenced Governor George Ryan's unprecedented commutation of the sentences of 164 death row inmates on his last day in office. Along the way, he provides a brief history of America's ambivalent relationship with the ultimate punishment, analyzes the potent reasons for and against it, including the role of the victims' survivors, and tells the powerful stories behind the statistics, as he moves from the Governor's Mansion to Illinois' state-of-the art 'super-max' prison and the execution chamber.

This gripping, clear-sighted, necessary examination of the principles, the personalities, and the politics of a fundamental dilemma of our democracy has all the drama and intellectual substance of Turow's celebrated fiction.

"This is a sober and elegantly concise examination of a complex, fraught topic...an invaluable, objective look at both sides of this critical but highly charged debate." (Publishers Weekly)

What listeners say about Ultimate Punishment

This was a fascinating and even-sided review of the pros and cons of the death penalty. Turow was chosen to be on Governor Ryan's committee to review the death penalty in Illinois, and Turow joined without an opinion on the subject. He reviews the arguments that both sides like to present for and against the death penalty in an even handed manner, and then examines the truth of the claims. It gave me insight into the limitations that our current court system has regarding capital cases and the application of the death penalty. I particularly enjoy audiobooks read by the author, this one kept my interest both from the good reading and the topic.

The presentation is unbiased and thought provoking.
An engrossing book.
Highly recommend this book to anyone who would like to understand how the system works. The book does a good job of explaining the commission’s recommendations regarding the ultimate punishment.

I am an audio learner so this is a great option for me. In addition I had to travel this week for a funeral and I get motion sick easily. I was assigned to read this book and write a report on it. Thanks to Kindle and Audible I was able to get the "reading" done and I was able to highlight notable sections and add notes as well which will make it much easier for me to assemble my report! Life saver!

Ultimate Punishment is a Iller

For those of us from Illinois, and followed these stories in the news, this is a must read....