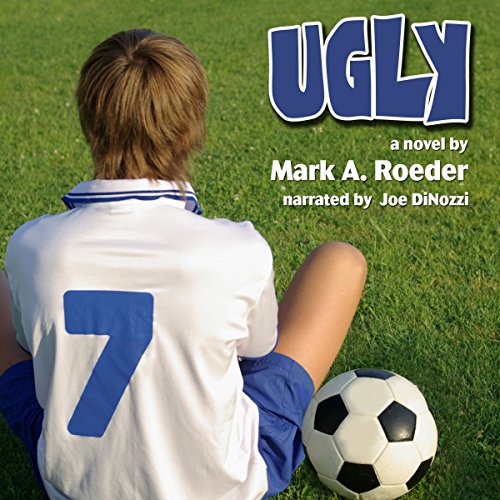 Julian is ugly. He knows it. Everyone knows it. He is also a boy with secrets. He's gay, his family owns the local funeral home, and he's not certain which secret he more desperately desires to keep. Julian is a wallflower, but tries out for the soccer team to please his father. Beyond all hope, he makes the team - and there he meets boys who change his life forever and a coach he suspects is trying to kill him.

Julian's greatest love is music. He slips off at lunch and after school to play the grand piano in the music room. His music attracts the attention of a secret admirer and for the first time ever someone sees beauty in Julian - his music.

The tragic death of teammates forces Julian to realize that he might not have as much time as he believed and leads him to take a desperate chance. Julian is determined to stop sitting on the sidelines of life. Friendship and love is worth any risk.

What listeners say about Ugly

I cried and laughed all the way.

Being gay myself a lot of what happens in this book has happened to me or surely I have such thoughts, especially when I was a teenager. The story is about being gay and fearing the hatred and bullying that it can attract. It is also seeing into what makes people who they are. How to measure the real beauty of each other. It is easy to be attracted to external beauty, but as we all know that is only skin deep. Knowing the kindness of others, their ability to love, is "true beauty" I feel and surely what I look for in others. This is a great story but it has eternal truths that we all need to remember and practice.

I loved this book because it had a great realistic character. Someone who has body image issues. It shows that it truly isn't what is on the outside that matters.

The overall story was compelling and important.

The excessive references to how gorgeous the other guys were and how ugly he was got old fast. The audio quality was poor, whenever the narrator spoke, I could hear something like feedback / a background hum when he spoke which made listening irritating.

Do you think Ugly needs a follow-up book? Why or why not?

No, the arc was fine as is.

Heartbreaker with a feel-good ending

bring on the kleenex, a 2L bottle of wine...and a good friend to hold your hand

Joe DiNozzi was great! I had the privilege of auditioning him for some voice over work years ago. I bought this book then and finally had time to listen to it.
Joe keeps the story moving and I’m not going to lie, I laughed, I gasped, and I was enthralled the whole time. It took me two days to just steam through it while at work.

Total guilty pleasure...I mean technically when it comes down to it ....well yeah.....but I still really liked.....reading marks books is a total flashback to how I wish MY highschool life had been. Lol

I especially enjoyed the music in this story and found the story very well written and touching. WAY too much self criticism by the main character, but otherwise heartfelt and touching.

A hell of a book!

This book brings me back to my youth. and it remains me of all the lost opportunities that I had and blew it. a fascinating book! Couldn't stop listening. You never get a 2nd chance at a 1st impression. Just go with your gut, and take a chance in life!

I just can't stop saying how great a writer mark is. the story pulls me in to point where I'm apart of the story an reliving my own life back in the days. I laughed I smiled I got excited I cried an I felt what the story telling.
Jim Arrowsmith
Salt Lake City Utah
arrowsmithjim11@gmail.com

Average - maybe a little better due to humor

the story is a little different from most coming out stories due to the fact that you are kept in suspense about the love interest of the MC and you really cant figure out who it is. This makes it both better and worse than other stories in this catagory. Better because its different, worse because you really do not get to know him. But i guess this is not the point of the story. It is more a story of friendships and trials of being a gay kid with body issues in high school than anything else. If you listen to it with that in mind the story isnt bad and sometimes humorous. But do not expect a "normal" two gay boys coming out story.

Excellent book, with an emotional ending. This book shows what homophobia in highschool was like

Ugly was a suspenseful, dramatic story that was both funny and sad at times. I remembered aspects of my youth while listening, and I was not disappointed in the final suspenseful chapters outcome. A good read and author, I will certainly explore more of his work.