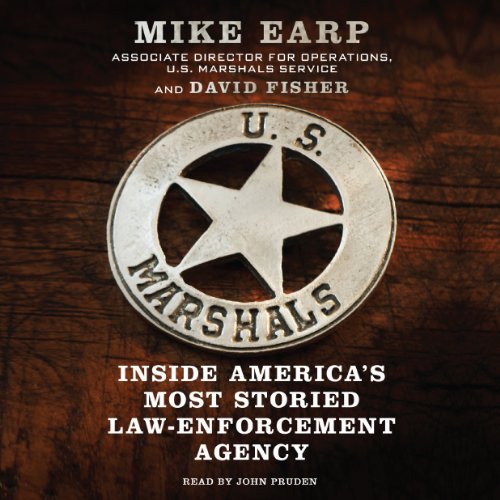 By: Mike Earp,David Fisher
Narrated by: John Pruden
Try for $0.00

Blending history and memoir, retired U.S. Marshal Mike Earp - a descendant of the legendary lawman Wyatt Earp - offers an exclusive and fascinating behind-the-scenes look at the most storied law enforcement agency in America, illuminating its vital role in the nation's development for more than two hundred years.

Mike Earp spent his career with the U.S. Marshals Service, reaching the number three position in the organization's hierarchy before he retired. In this fascinating, eye-opening audiobook, written with the service's full cooperation, he shares his experiences and takes us on a fascinating tour of this extraordinary organization - the oldest, the most effective, and the most dangerous branch of American law enforcement, and the least known.

Unlike their counterparts in the police and the FBI, U.S. Marshals aren't responsible for investigating or prosecuting crimes. They pursue and arrest the most dangerous criminal offenders on U.S. soil, an extraordinarily hazardous job often involving gun battles and physical altercations. Earp takes us back to the service's early days, explaining its creation and its role in the border wars that helped make continental expansion possible. He brings to life the gunslingers and gunfights that have made the Marshals legend, and explores the service's role today integrating federal, state, and local law enforcement agencies in the hunt for the most notorious criminals - terrorists, drug lords, gun runners.

Setting his own experiences within the long history of the U.S. Marshals service, Earp offers a moving and illuminating tribute to the brave marshals who have dedicated their lives to keeping the nation safe.

What listeners say about U.S. Marshals

Boring, history of the bureaucracy

No tales of capture or hunting fugitives, just repetitive history of how the agency needs funding and how nobody knows what they do. Constant references to congressional funding and silly nonsense. If you like GHOST, this is NOT for you. There aren't any really good hunts or capture stories. Feel ripped off by this.

This entertaining book tells a variety of stories about Mike Earp who is a US Deputy Marshall. It is a very insightful read and enjoyable. I have not only listen to it once but have listen to it multiple times. Would recommend highly.

All over the place

I enjoyed the content, but there was no rhyme or reason behind the placement of the stories in the greater context of the whole.

Realistic, enjoyable history of modern evolution of US Marshals. The narration was excellent and really made this book excel.

loved it. it's a gripping and very informative book. I'll probably listen to it a few more times

if you like a true story about the oldest federal law enforcement agency read this book. It has true stories of what deputy Marshals do in tracking fugitives. It has humor in it but some serious and close calls these deputies go through.

I enjoyed it, A good set of stories as told by US Marshals. Very informative

What did you love best about U.S. Marshals?

The book was exactly what I hoped: chock full of war stories from various marshals covering many different aspects of their work.

Why not 5 stars...the introduction, prolog, foreword, and so forth, took almost an hour and a half of this audiobook, and they needed substantial editing. There was much duplication in each of these sections, with dry statistics repeated over and over again. To be fair, each of these had a different author, but an editor should have harmonized them.
It's easy to skip over repetitive stuff in a bound book, not so easy in an audio book, when you can't easily glance over pages.

This is a fascinating overview of how the US Marshal Service, (not to be confused with local Marshals who handle court paperwork, for example), works worldwide. It includes a colorful history of the department from its earliest days, and was fun and easy to follow all the way through due to its excellent organization.

After several chapters on the history and function of the service, the book delves into a plethora of case files, real examples of the Marshals in action getting bad guys. It was fun and informative, and it gave me a serious respect for these men and women. I would never want to tangle with anyone of them, that's for sure!

The reading by Pruden was excellent. His "wise guy cop" voice really puts you in the center of the action and was easy to listen to and understand.

the life of a deputy

Excellent insight into the Marshalls service,