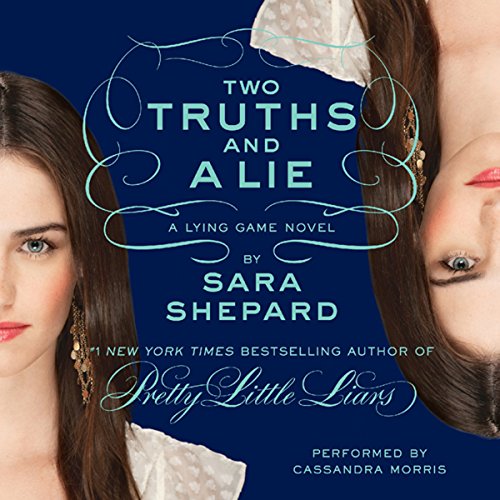 Two Truths and a Lie

By: Sara Shepard
Narrated by: Cassandra Morris
Try for $0.00

Foster child Emma Paxton is finally starting to get the hang of walking in her dead twin sister's fabulous shoes, even as she tries to track down Sutton's murderer. But Sutton was no angel, and the pranks she and her friends pulled leave Emma with a long list of suspects. The most mysterious of them is Thayer Vega, who's currently missing - a fact which many of Sutton's friends blame on her.

Emma has no idea what Sutton did that could have driven Thayer away. Until Thayer himself shows up on her doorstep. Is he here to get revenge? Or is it possible he already has?

What listeners say about Two Truths and a Lie

What did you love best about Two Truths and a Lie?

The way it leaves you guessing about who killed Sutton.

Emma because she knows how to play the lying game.

Have you listened to any of Cassandra Morris’s other performances before? How does this one compare?

Yes, she is always outstanding.

The third book in the series didn't disappoint. I found that it wasn't as suspenseful as the first two in the series. At this point I just wish there was an ending in sight. I know the 5th book is due out later this year. I probably won't read anymore until I find out if this is the last one. I just want it to end, Unlike Pretty Little Liars, which I read the first eight excitedly, then she ended up coming out with a whole bunch more.

Two truths and a lie

Still enjoying the story as it unfolds but frustrated that it's predictable. Everything follows the same trend and the "surprises" are not surprising.