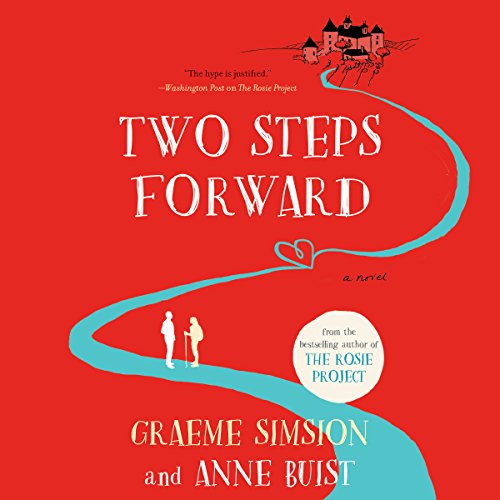 From the New York Times best-selling author of The Rosie Project comes a story of taking chances and learning to love again as two people, one mourning her husband and the other recovering from divorce, cross paths on the centuries-old Camino pilgrimage from France to Spain.

“The Chemin will change you. It changes everyone....”

The Chemin, also known as the Camino de Santiago, is a centuries-old pilgrim route that ends in Santiago de Compostela in northwest Spain. Every year, thousands of walkers - some devout, many not - follow the route that wends through quaint small villages and along busy highways alike, a journey unlike any other.

Zoe, an artist from California who’s still reeling from her husband’s sudden death, has impulsively decided to walk the Camino, hoping to find solace and direction. Martin, an engineer from England, is road-testing a cart of his own design...and recovering from a messy divorce. They begin in the same French town, each uncertain of what the future holds. Zoe has anticipated the physical difficulties of her trek, but she is less prepared for other challenges, as strangers and circumstances force her to confront not just recent loss but long-held beliefs. For Martin, the pilgrimage is a test of his skills and endurance but also, as he and Zoe grow closer, of his willingness to trust others - and himself - again.

Smart and funny, insightful and romantic, Two Steps Forward reveals that the most important journeys we make aren’t measured in miles but in the strength, wisdom, and love found along the way. Fans of The Rosie Project will recognize Graeme Simsion’s uniquely quirky and charming writing style.

The narrators destroy a good book

I have never before noticed the power of poor narration to destroy a perfectly good book. I've appreciated great narration, but could terrible narrators actually destroy a good book? Unfortunately, yes. Pick up the book and read it. You will enjoy it. Don't even give the Audible version a try. You don't want those over-acted phony voices in your head.

So boring! Performers had trouble with accents

This book is about an emotional journey over the course of a long long trek. I would have appreciated much more insight into the evolution of the two main characters, but instead the authors focused so much more on the day to day meals and lodging requirements for such a journey. Also, the will they/won't they plot was annoying because it went on for so much of the book. And their emotional connection didn't really click for me. it seemed like they could always take or leave each other.
As for the narration, I was satisfied with how the narrators portrayed the actual characters they were narrating, but when the male actor, Simon, covered "Zoe's" dialogue in an American accent, it was terrible, and very distracting. And the same was true for the female actress. When she came to the make dialogue in her chapters, her British accent was also terrible. Man, that was hard to listen through. I wish they had just inserted the other actor reading for their own dialogue.

Poor narration...both the female and male narrator had a terrible time with accents. I am surprised that this title was released with such poor narrators. The story had potential, but the two main characters were not fully developed. I am sorry to say I had to give up about half way through the audio book.

There’s something about this book that is just satisfying. I was engaged from the beginning. I loved Zoe’s and Martin’s journeys. No, it wasn’t especially deep or earth shaking, but it made me happy. Sometimes that’s enough. I’d read a sequel in a heartbeat.

I was not sure if a story like this would hold my attention. There was no issue except that I do not want it to be over! I loved Zoe and Martin and all of the other pilgrims. A contemporary love story in an historical setting with an underlying theme of redemption. I intend to order the hardcopy of this book.

I really liked how deeply Zoe examined her past and the baggage she carried. The changes the Martin goes through surprised me. I did not expect these characters to grow as much as they did. Even the minor characters had big moments. This story was a pure joy to listen to. The narrators were very good.

I've learned a few things from their experience, as you would expect from reading a book, but it makes me want to take on what problems and opportunities life brings on ahead. The travelers set themselves up on a physical, mental, and spiritual journey from France to Spain while meeting many others. The readers did a great job at performing the story.

I didn’t like this one as much as his Rosie books, but I had never heard of these pilgrimages. I love his flawed human characters who muddle through challenges and life’s hardships. The inventive ways they actually come out of despair is heartwarming. The narration wasn’t the best I’ve listened to either, but stuck with it and overall found it a decent listen.

Stick with the Rosie books!

I listened to this because I loved the Rosie series by Mr Simsion, but this was a disappointment. The story was as plodding as the walkers journey, but what really ruined it for me were the performances. The woman reader mispronounced so many standard English words (karma? modern?) it was grating. And both readers imitated the other characters voices in horrendous accents. Not all Americans sound like they are from Long Island! What was supposed to be a Brazilian accent was oddly German at times. Skip this and read - or reread - the Rosie series which are all well written and performed.

I can’t believe II listened to the whole thing

Basically, the story was predictable and somewhat saccharine. The worst part was the terrible accent is read are used when they weren’t speaking in their own normal accent. In particular, Simon Slater’s attempt at an American female came out like Mike Myers doing coffee talk. It was truly awful.