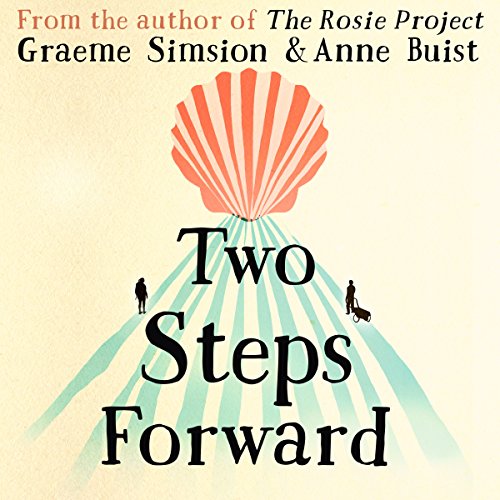 A romantic comedy from Graeme Simsion, author of The Rosie Project, and his wife Anne Buist.

Two misfits walk 2000 km along the pilgrims' way in Spain to find themselves and, perhaps, each other.

Zoe, a sometime artist, is from California. Martin, an engineer, is from Yorkshire. Both have ended up in picturesque Cluny, in central France. Both are struggling to come to terms with their recent past - for Zoe, the death of her husband; for Martin, a messy divorce. Looking to make a new start, each sets out alone to walk 2000 kilometres from Cluny to Santiago, in northwestern Spain, in the footsteps of pilgrims who have walked the Camino-the Way-for centuries.

The Camino changes you, it's said. It's a chance to find a new version of yourself. But can these two very different people find each other? In this smart, funny and romantic journey, Martin's and Zoe's stories are told in alternating chapters by husband-and-wife team Graeme Simsion and Anne Buist.

Two Steps Forward is an audiobook about renewal - physical, psychological and spiritual. It's about the challenge of walking a long distance and of working out where you are going. And it's about what you decide to keep, what you choose to leave behind and what you rediscover.

Soon to be a film produced by Ellen DeGeneres.

It started well but lost it's way near the end however it gives a fair insight into the effects of the Carmina on pilgrims who walk it.

Cringe, surprised I managed to end it!

I am so surprised, this book really didn't do it for me! It was so frustrating, repetitive, boring and unemotional. Narration was so awful. I'm surprised I managed to continue to the end! Totally different to the Rosie Project

Really enjoyed this book. it's easy to get in to and the characters are likeable and interesting.
it's a long walk undertaken but boring, lots of twists and turns and a bit of a love story thrown in.
The characters are "finding" themselves and there's an element of the reader/listener doing the same.
A really enjoyable and contemplative book.

I read this in preparation to walk the Camino, now I want to start sooner! A wonderful tale, full of twists and turns but mainly of hope and change.

I loved this book at a time of feeling low, it has inspired and soothed. The characters bring you in, being so well executed in delivery.. they are real, as I see them in my minds eye and feel they exist, at least versions of them do. Living in this book whilst listening during any free time I created, made my time so enjoyable. I am so sad it has had to conclude. So now I will search for.. hopefully a follow up book...the St Francis walk book? if there is no follow up book this one has inspired and energised.. A great listen. A story of hope and inspiration on the rollarcoaster of life. No matter if your religious or just seeking sustenance.

a pleasant, undemanding listen...story is, forgive the pun, pedestrian and the performances do ok with a limited script.
easy listening

couldn't wait for it to be over...

The female narrator's voice didnt match the character. Disliked the Californian psycho-babble. Also didn't get on with the character of Zoe. I didn't warm to her and found her irritating and self-absorbed. Just not for me but I'm sure others will enjoy.

Very different to the writers other books

This story is probably very good but unfortunately for me the narrators voices didn’t match the parts they were playing.