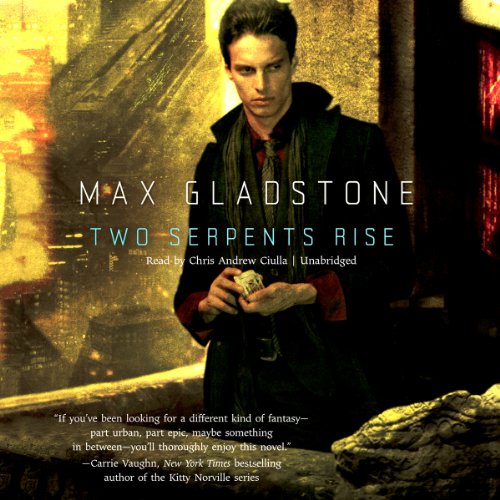 By: Max Gladstone
Narrated by: Chris Andrew Ciulla
Try for $0.00

Shadow demons plague the city reservoir, and Red King Consolidated has sent in Caleb Altemoc - casual gambler and professional risk manager - to cleanse the water for the sixteen million people of Dresediel Lex. At the scene of the crime, Caleb finds an alluring and clever cliff runner, crazy Mal, who easily outpaces him.

But Caleb has more to worry about than the demonvinfestation, Mal, or job security when he discovers that his father - the last priest of the old gods and leader of the True Quechal terrorists - has broken into his home and is wanted in connection with the attacks on the water supply.

From the beginning, Caleb and Mal are bound by lust, craft, and chance, as both play a dangerous game where gods and people are pawns. They sleep on water, they dance in fire, and all the while the Twin Serpents slumbering beneath the earth are stirring...and hungry.

A much weaker installment than the first audiobook. The narration was slightly better than Three Parts Dead (which doesn't take much), but still awkward enough to continuously pull you out of immersion. The story for this one is weaker than the initial offering, which is too bad, since the premise was so good.

I loved the "first" Craft Sequence book, but this was even better. Mr. Gladstone has created a really fascinating world where the relationship between magic and faith is extremely important... and volatile. This book uses that conflict to explore themes of duty and terrorism, presenting layered characters who are each trying to do what they think is right and best for the city that they love.

Note: Even though this is Book 2 in the series, it can be read as a stand alone.

This book is set in the same world as Three Parts Dead but in a different city with completely different characters. Caleb Altemoc is our hero in this tale. He’s been tasked by Red King Consolidated to cleanse the demon infested waters of the city of Dresediel Lex. While he investigates the source, and a possible way to do the cleansing, he runs into Mal, a cliff runner who has some answers and a hidden agenda.

This book was just a tad more fun than Three Parts Dead. Much of the city Dresediel Lex is based on ancient Mesoamerican cultures and I really reveled in that. The setting was so rich, from the food to the architecture to the slang. From this backdrop, we get the myths about the Two Serpents and what that means to various groups controlling the city. The current political group rose to power some decades ago, but supporters of the old ways, including human sacrifice, still abound.

And that is where Caleb’s dad comes in. He use to be a high priest among the ruling class and performed many human sacrifices. Obviously, Caleb has some strong feelings about his father. The dynamic between the two kept me on edge through the story. It was excellent! So much for the two of them to work out and perhaps some of it can’t ever be worked out.

The Red King is a spooky, spooky dude who happens to enjoy quality tequila. In Three Parts Dead, we were introduced to the idea of these very long-lived craft (i.e. magic) users and in this book we get an up close look at just such a specimen. I would be hard pressed to say that the Red King is still human, but there are times throughout the tale when he shows glimpses of his old humanity. There’s history there and I would love for there to be a story just about the Red King and how he came to be.

Next, there is Mal. She’s a cliff runner, which is like our modern-day parkour but a bit more dangerous as I doubt much of Dresediel Lex has the building safety codes like our modern cities do. She’s smart, athletic, and definitely attracted to Caleb. He’s not too sure what to do with her at first. As the two get to know each other, it becomes apparent they have some seriously divergent views on a few things. I really hoped the two would be able to work things out – there was such a spark between them!

The demons. I can’t leave this review without mentioning the demons. That seems to be a catch all phrase for these beings that inhabit the water supply. They have their own needs and won’t hesitate to snap up the unwary human, but they mostly come off as dangerous animals and not some conniving riddling beings that want souls. It was a different take on the word ‘demon’ and very fitting with the mythology on the Two Serpents.

It’s an excellent book full of mystery and rich in myth. I highly recommend it and I have fingers crossed that someone will turn the rest of the series into audiobooks.

The Narration: Chris Andrew Ciulla was a great fit for Caleb. He did all the accents right and had this gravity that suited Caleb well. His other character voices were distinct and his female voices were believable. I especially liked his super creepy voice for the Red King.

Solid all around! Awesome weird fantasy.

It's an excellent spin on the urban fantasy genre, but at times both performance and writing took me out of my immersion. I highly recommend to fans of weird fantasy, and the world building is fantastic, but it does not live up to Gladstone's previous work's promise. Here's hoping he goes all in on the next one and produces an even more amazing piece.

Would you consider the audio edition of Two Serpents Rise to be better than the print version?

Not better, necessarily...but certainly enhanced. I thought the pacing was right where it needed to be for this kind of story. The narrator's rhythms worked. It was a good mix of colorful characters, and the story itself had a few nice twists.

I thought the world that Max built was quite innovative. Reminded me of some great old world detective stuff, but with the characters having new tasks appropriate to this different, independent era.

Which character – as performed by Chris Andrew Ciulla – was your favorite?

I really liked The King in Red...Kopel. His performance of that character really helped me envision a walking skeleton badass.

No. Wasn't that kind of mushy story. Sorry to disappoint.

I'd recommend it. An exciting, innovative ride.

What made the experience of listening to Two Serpents Rise the most enjoyable?

It's a fresh new take on fantasy in present day. The tensions of the story as it unfolds, in conjunction with the actor's delivery, use the element of suspense with precision. The final result feels extra noir-like and I think that was a good touch.

I agree with many other book reviews on Amazon that the worldbuilding is top notch. Gladstone uses the city as more than simply a backdrop and he sends Caleb on an interesting journey through its innards.

Entertaining from beginning to end with solid writing and performance. What's neat to hear in the audiobook version is that they've found an actor who gets the hard-boiled narrator aspect that you often find in those classic gritty 40s black and white noir flicks. (Double Indemnity anyone?) I was particularly intrigued by how well the voice and delivery style matched up with the needs of the literary style.

In sum, if you're into urban fantasy or noir genres check it out and you'll be pleased.

Some of the most inventive fantasy written today

I am surprised at the relatively small number of people who appear to have read/reviewed this Audible book - Max Gladstone is, for my money, one of the most inventive writers of fantasy working today, and this book is excellent. It draws on both the urban fantasy (Noirish twists! A bit of romance!) and the epic fantasy (Undead wizards! World-threatening events!) genres while adding more than a bit of the New Weird mentality of Melville and Vandeermer. Set in a richly imagined world that somewhat parallels our own, but where gods were real, and eventually overthrown by once-human wizards, the books takes its setting seriously while never losing focus on creating living, breathing characters and exciting action scenes.

Even without the fantasy elements, this books well as a tale of nationalist unrest, religious fanaticism, corporate intrigue, and, yes, parkour - but the magic matters too. While the action is interesting and the relationships between characters feel real, Gladstone has created a very unique magic system, and seems to have a knack for describing magical wonders and horrors in ways that feel both fresh and literary. As an added element of originality, though the previous novel was set in a very Western setting, this one takes place in an Aztec-like city, filled with pyramids and with a history of human sacrifice. It is rare to see a setting inspired by Mesoamerican myths, and this was very well done.

I read the first book in the series before listening to this one, but I think Two Serpents Rise could stand on its own as well. Excellently read, and very different from anything else out there, I strongly recommend it to fantasy fans who might be tired of either epic swords-and-sorcery or urban vampires and wizards.

Great book, but where are the other books?

When will audible release the rest of the series? they have only posted the first two of them.

It was hard for me to finish this book. There were some spots that held my attention and that I really liked and then I would lose interest again. The first in the series was the same for me but I liked it better.

I loved the first book even with the narrator who took awhile to get used to. This book just seem cjoatic and all over the place. The characters didn't interest me. The main character just seemed to roam around and run into trouble. It was a little predictable. I'm not saying others won't enjoy it. But I don't think it had the same feel as the first book in terms of story and character building. The narrator was ok.